The new Fiix prothrombin time (Fiix-PT) and its derived Fiix-normalized ratio (Fiix-NR) is affected only by reductions in coagulation factors (F) II and X, the two factors responsible for the antithrombotic effect of vitamin K antagonists (VKA). Due to insensitivity to reductions in the short half-life FVII, the Fiix-NR rises later than standard PT-INR during warfarin initiation. To describe a warfarin initiation nomogram adapted for monitoring with Fiix-NR, anticoagulation development was assessed during use of standard PT-INR based initiation nomogram and after adapting the initiation nomogram for Fiix-NR monitoring. Normalized ratios were retrospectively assessed in consecutive warfarin naïve patients during their first 60 days of warfarin intake for one year prior to (PT-INR period) and for one year after replacing the PT-INR with the Fiix-NR (Fiix-NR period). The INR target was NR 2.0–3.0. We evaluated 160 patients monitored with PT-INR and dosed with the PT-nomogram, 57 monitored with Fiix-INR but dosed with PT-nomogram, and 163 Fiix-NR monitored patients dosed using a new Fiix nomogram. Mean PT-INR over 2.0 was reached on day 7 during the PT-period and remained around 2.5 thereafter. When the PT-nomogram continued in use during Fiix-monitoring significantly more patients became overanticoagulated during days 11–29. After the nomogram was modified to respond to rising Fiix-NR with larger initial dose reduction, the mean Fiix-NR reached over 2 on day 8–9 and remained around 2.5 thereafter. When warfarin is monitored with Fiix-NR, an adjusted dosing nomogram should be used during initiation to prevent early overanticoagulation. 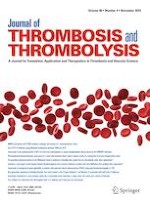 Apixaban: a novel agent to treat heparin induced thrombocytopenia and to prevent embolism in patient with atrial fibrillation after multiple valve replacement?