Recent evidence suggests that increased dopaminergic signaling within the dorsal striatum played a central role in the evolution of the human brain. This increase has been linked to human prosociality and language in what has been described as a dopamine-dominated striatum personality style. Increased striatal dopamine is associated with an increase in ventral striatal activity and promotes externally driven behaviors, including cooperation and social conformity. In contrast, decreased striatal dopamine is associated with increased dorsal striatal activity and favors internally driven and goal-oriented behaviors. Previous comparative studies have focused on the dorsal striatum, measuring dopaminergic innervation in the dorsal and medial caudate nucleus and putamen. Here, we add to this knowledge by examining regions of the ventral striatum. We quantified the density of tyrosine hydroxylase–immunoreactive axons, as a measure of dopaminergic innervation, in the nucleus accumbens and ventral pallidum of humans, great apes, platyrrhine and cercopithecid monkeys. Our data show that humans have a significantly greater dopaminergic innervation in both structures, supporting the hypothesis that selection for a prosocial neurochemistry in the human basal ganglia may have contributed to the evolution of our uniquely social behavior profile.
Anzeige 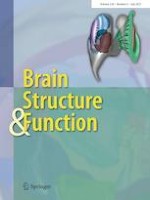 Neural dynamics of pride and shame in social context: an approach with event-related brain electrical potentials