Chau et al. have demonstrated the feasibility of the supracerebellar transtentorial (SCTT) approach to reach to the fusiform gyrus with their cadaveric anatomical study. After dissecting three brains and six cadaveric heads they concluded that SCTT approach is a viable alternative for removal of the lesions in the fusiform gyrus especially in the posterior portion.
We developed the paramedian supracerebellar transtentorial (PST) approach to the entire length of the mediobasal temporal region, as well as the fusiform gyrus, and published the anatomical study together with the series of cases [1]. In this series, we had four cases with various lesions in the fusiform gyrus and two of them were exclusively in the posterior portion of the fusiform gyrus. Up to now we have had eight cases that were operated on via the PST approach.
We agree with the authors that the PST approach is the best option for the fusiform gyrus lesions as well as for lesions of the posterior and medial portions of the mediobasal temporal region. This anatomical targets are basically separated by the collateral sulcus, which is almost always identified during the PST approach, together with other crucial landmarks. Therefore, it is safe to say that one of the main advantages of the PST approach is its ability to provide the surgeon with exceptional anatomical orientation, which in return helps in preserving neighboring normal neurovascular structures. When dealing with diseases of archipallium, staying medial to the collateral sulcus protects the neopallium from iatrogenic injuries, and vice versa.
The PST approach is the only approach that exposes the fusiform gyrus directly without any neocortical incision or retraction. After the tentorial incision, the fusiform gyrus, collateral sulcus and parahippocampal gyrus are easily identified. Although the PST approach is not more difficult than any other approaches, this new anatomical perspective should be mastered with laboratory studies before any intervention on a patient is attempted. Therefore, the authors’ demonstration of their anatomical work before the surgical cases is very important and should be complimented. When adequate time is spent on the anatomical aspects of it, the PST approach becomes an indispensable tool in the neurosurgeon’s armamentarium.
Increasing the number of publications on this approach would be very welcome on our side and hopefully with every publication the PST approach will be improved and become widely accepted by neurosurgeons.
M. Volkan Harput
Uğur Türe
Istanbul, Turkey
1. Türe U, Harput MV, Kaya AH, Baimedi P, Firat Z, Ture H et al (2012) The paramedian supracerebellar-transtentorial approach to the entire length of the mediobasal temporal region: an anatomical and clinical study. Laboratory investigation. J Neurosurg 116:773-791

Three brains and six cadaveric heads were examined. A stepwise dissection of the SCTT approach to the posterior fusiform gyrus was performed. Local cortical anatomy was studied. The operability score was applied for comparative analysis on surgical anatomy.

The major posterior landmark used to identify the fusiform gyrus with respect to the medial occipitotemporal gyrus was the collateral sulcus, which commonly bifurcated at its caudal extent. Compared with other surgical approaches addressed to access the region, SCTT demonstrated the best operability in terms of maneuverability arc. Favorable tentorial anatomy is the only limiting factor.

The supracerebellar transtentorial approach is able to provide access to the posterior fusiform gyrus via a minimally disruptive, anatomic, microsurgical corridor. 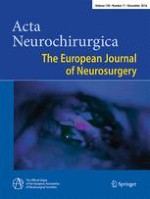 Letter to the editor - Neurosurgery Training

WhatsAPP in neurosurgery: the best practice is in our hands

Purely endoscopic resection of pineal region tumors using infratentorial supracerebellar approach: How I do it

Pseudoaneurysm formation caused by the withdrawal of a Trevo ProVue stent at a tortuous cerebral vessel: a case report