Removing fluid is a common therapeutic option in patients with acute circulatory failure and/or acute respiratory distress syndrome (ARDS), especially at the late phase of disease [ 1, 2]. This is based on the evidence that the cumulative fluid balance is an independent factor that increases mortality in patients with septic shock [ 3] and ARDS [ 4], especially in the case of acute kidney injury [ 5]. Fluid overload may impair the function of many organs, including the kidneys [ 6]. Along with the prediction of preload unresponsiveness, which prevents administration of ineffective fluid boluses, fluid removal contributes to reducing the fluid balance. Compared to a liberal strategy of fluid administration, a conservative strategy including fluid removal prompted extubation in ARDS patients [ 7]. The net fluid removal by renal replacement therapy (RRT) was shown to decrease the intra-abdominal pressure, the cardiac preload and the extravascular lung water [ 8].
However, the risk of fluid removal is to remove too much fluid and to impair the haemodynamic condition. Intradialytic hypotension is obviously deleterious [ 9] and alters renal recovery in patients with acute renal failure [ 10, 11]. Also, in cases when it leads to premature termination of RRT, intradialytic hypotension reduces the dose of dialysis and the volume of fluid removal [ 9, 12].
Anzeige
Decrease in cardiac output as an adverse effect of excessive fluid removal should occur in the case of preload dependence, i.e. when changes in cardiac preload physiologically result in changes in cardiac output. The aim of this study was to test whether the presence of preload dependence can predict intolerance to fluid removal performed with ultrafiltration in patients under RRT. Passive leg raising (PLR) was used to test preload dependence.

The study was conducted in the 15-bed medical intensive care of a university hospital. It was approved by the institutional review board of our institution (Comité pour la Protection des Personnes Ile-de-France VII). Informed consent was obtained from all patients or next of kin.
Patients were enrolled under the following conditions:
1.
Episode of acute circulatory failure, in its acute or resolution phase, defined by (1) systolic blood pressure <90 mmHg (or a decrease >50 mmHg in previously hypertensive patients) or the need for norepinephrine, (2) urine output <0.5 mL/kg/h for at least 2 h, (3) tachycardia >100 beats/min, (4) skin mottling or (5) blood lactate >2 mmol/L. The resolution phase of circulatory failure was defined by a decrease of the dose of norepinephrine for more than 24 h.
2.
Monitoring by a PiCCO2 device (Pulsion Medical Systems, Munich, Germany) already in place.
3.
Decision by the physician in charge to perform intermittent RRT with weight loss.
4.
Haemodynamic stability, as defined by no volume expansion, no increase in the dose of catecholamines and no change in mean arterial pressure >10 mmHg during the last 3 h.
Patients were excluded if they presented intracranial hypertension (which is a contraindication to the PLR test), if RRT was interrupted for non-haemodynamic reasons and if ventilation and sedation modalities were changed during the study period.
Anzeige

All patients had an internal jugular vein catheter and a thermistor-tipped arterial catheter (PV2024 Pulsion Medical Systems, Munich, Germany) in the femoral artery connected to the PiCCO2 device. The dialysis catheter was in the femoral position, contralateral to the arterial catheter. Three cold boluses were used when performing transpulmonary thermodilution [ 13]. This allowed us to measure cardiac index (CI) (through transpulmonary thermodilution and pulse contour analysis), global end-diastolic volume and extravascular lung water (both through transpulmonary thermodilution) [ 14].
Global end-diastolic volume corresponds to the volume of the four cardiac chambers at end diastole and is a marker of cardiac preload [ 15]. Extravascular lung water is the volume of water that is contained in the interstitium, the intracellular compartment, the lymphatic fluid, the surfactant and the alveoli [ 16, 17]. Echocardiography was performed at the time of inclusion.
It has been already reported that extracorporeal circulation of blood during RRT does not alter the reliability of transpulmonary thermodilution measurements [ 18, 19], even for blood pump flows as high as 350 mL/min [ 19], even though this has been reported during continuous and not intermittent RRT. All values were indexed by the ideal and not the actual body weight, so that indexation in itself could not change the variables due to the simple weight loss induced by fluid removal.

Intermittent RRT was performed according to the current practice of our unit. It was performed with the AK200-TS device (Gambro, Lund, Sweden) by using AN69-ST membranes (Hospal, Meyzieu, France). In our unit, besides intermittent RRT, we also use continuous RRT, which is preferred in cases of haemodynamic instability. Patients receiving continuous RRT were not included in the study.
Patients had a 14F dual-lumen catheter inserted in the femoral or jugular veins (with 25- and 14-cm catheter lengths, CS-26142-F and CS-12142-F, Arrow Intl, Reading, PA, respectively). Both lines of the circuit filled with heparinised 0.9 % saline were simultaneously connected to the catheter. Circuit anticoagulation was performed with enoxaparin (4000 IU in the circuit at the beginning of dialysis), except if unfractionated heparin was already intravenously administered for another reason. In the case of high haemorrhagic risk, anticoagulation was not performed, but the circuit was flushed with 100 mL of saline every 30 min. No fluid was systematically infused at the induction of haemodialysis.
Purified (reverse osmosis) water and bicarbonate-based dialysate were used. According to our practice, dialysate sodium concentration was set at 145 mmol/L, except in the case of severe dysnatremia. Potassium concentration was set at 3 mmol/L, except in the case of severe hyperkalaemia. Dialysate temperature was 36 °C. Dialysate flow rate was 500 mL/min in all sessions, and blood flow rate was 200–300 mL/min. The duration of intermittent RRT and the volume of fluid removed were planned by the physicians in charge of the patient.

Haemodynamic intradialytic hypotension was defined as the occurrence of one episode of hypotension requiring one or more of the following interventions from the clinicians in charge: interruption of fluid removal, introduction of norepinephrine or increase in its dose, administration of volume expansion or interruption of RRT. Hypotension was defined as a mean arterial pressure lower than 65 mmHg [ 22], except in patients with a previous medical history of chronic hypertension. In this case, hypotension was defined by a mean arterial pressure lower than 80 mmHg. In all patients, a set of haemodynamic measurements was recorded at the time of hypotension before any further intervention. In patients where RRT was interrupted, a set of haemodynamic measurements was also recorded immediately after blood restitution. For better clarity of data presentation in patients with intradialytic hypotension, analysis was stopped at the time of hypotension, even if this did not lead to the interruption of RRT (i.e. if hypotension led to the introduction/increase in the dose of norepinephrine or the stop of fluid removal).

The normality of data distribution was tested with the Anderson–Darling test. Data are expressed as median [interquartile range] or n (frequency in %), as appropriate. The primary analysis consisted in predicting the occurrence of intradialytic hypotension by the means of the PLR test performed before RRT. Receiver operating characteristic (ROC) curves were constructed to test the ability of PLR-induced changes in CI and of CI at baseline to predict intradialytic hypotension. The areas under the ROC curves (AUC) were compared using the DeLong’s test. AUC, sensitivities, specificities, positive and negative predictive values are expressed as the values [95 % confidence interval]. The best value of PLR-induced changes in CI and arterial pulse pressure (PP) for predicting intradialytic hypotension was determined as the one providing the best Youden index.
A secondary analysis consisted in describing the time course of different variables in patients with and without intolerance to RRT. The dynamics of the variables was modelled using linear mixed-effect models with a random intercept and slope and compared [ 23]. Mixed-effect models that we used are currently the best way to explore longitudinal data with repeated measurements over time. Mixed models take into account the correlation between measurements in a given subject and more importantly use the whole information (i.e. all the measurements), providing a greater power than when the outcome is dichotomised as, for example, in logistic regression analysis. The models included both fixed and random effects for the intercept and slope. In multivariate analysis, the model was adjusted on age, fluid removal and initial systolic arterial pressure.
Anzeige
The sample size was estimated by considering a predicted mean value of CI at a baseline of 3 L/min/m 2, a standard deviation of CI at a baseline of 1 L/min/m 2, a PLR-induced change in CI of 20 % in patients with intradialytic hypotension [ 24] and an incidence of intradialytic hypotension of 33 %, with an α-risk of 5 % and a β-risk of 20 %. Eventually, the sample size was estimated to be 26 cases of well-tolerated RRT and 13 cases poorly tolerated RRT. Statistical analysis was performed with MedCalc 8.1.0.0 software (Mariakerke, Belgium). Mixed model analyses were performed with STATA software (release 13; StataCorp., College Station, Texas, USA).

Differences at baseline between patients with and without intradialytic hypotension

The CI at baseline was significantly lower in patients with than in patients without intradialytic hypotension (3.0 [2.3–3.2] vs. 3.5 [2.7–4.2] L/min/m 2, respectively, p = 0.03, Table  3; Fig.  1).
×
Patients with and without intradialytic hypotension did not differ at baseline in any variables except CI, including heart rate, systolic and mean arterial pressures, global end-diastolic volume, proportion of patients receiving norepinephrine and dose of norepinephrine in patients receiving this drug (Tables  1, 3). The settings of intermittent RRT at baseline were similar in both groups of patients (Table  2).

The authors warmly thank Dr. Antoine RACHAS for his help in statistical reviewing. 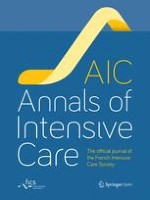 Prediction of fluid responsiveness: an update