Validation studies of whole slide imaging (WSI) systems produce evidence regarding digital microscopy (DM). This systematic review aimed to provide information about the performance of WSI devices by evaluating intraobserver agreement reported in previously published studies as the best evidence to elucidate whether DM is reliable for primary diagnostic purposes. In addition, this review delineates the reasons for the occurrence of discordant diagnoses. Scopus, MEDLINE/PubMed, and Embase were searched electronically. A total of 13 articles were included. The total sample of 2145 had a majority of 695 (32.4%) cases from dermatopathology, followed by 200 (9.3%) cases from gastrointestinal pathology. Intraobserver agreements showed an excellent concordance, with values ranging from 87% to 98.3% (κ coefficient range 0.8–0.98). Ten studies (77%) reported a total of 128 disagreements. The remaining three studies (23%) did not report the exact number and nature of disagreements. Borderline/challenging cases were the most frequently reported reason for disagreements (53.8%). Six authors reported limitations of the equipment and/or limited image resolution as reasons for the discordant diagnoses. Within these articles, the reported pitfalls were as follows: difficulties in the identification of eosinophilic granular bodies in brain biopsies; eosinophils and nucleated red blood cells; and mitotic figures, nuclear details, and chromatin patterns in neuropathology specimens. The lack of image clarity was reported to be associated with difficulties in the identification of microorganisms (e.g., Candida albicans, Helicobacter pylori, and Giardia lamblia). However, authors stated that the intraobserver variances do not derive from technical limitations of WSI. A lack of clinical information was reported by four authors as a source for disagreements. Two studies (15.4%) reported poor quality of the biopsies, specifically small size of the biopsy material or inadequate routine laboratory processes as reasons for disagreements. One author (7.7%) indicated the lack of immunohistochemistry and special stains as a source for discordance. Furthermore, nine studies (69.2%) did not consider the performance of the digital method—limitations of the equipment, insufficient magnification/limited image resolution—as reasons for disagreements. To summarize the pitfalls of digital pathology practice and better address the root cause of the diagnostic discordance, we suggest a Categorization for Digital Pathology Discrepancies to be used in further validations studies. Among 99 discordances, only 37 (37.3%) had preferred diagnosis rendered by means of WSI. The risk of bias and applicability concerns were judged with the QUADAS-2. Two studies (15.4%) presented an unclear risk of bias in the sample selection domain and 2 (15.4%) presented a high risk of bias in the index test domain. Regarding applicability, all studies included were classified as a low concern in all domains. The included studies were optimally designed to validate WSI for general clinical use, providing evidence with confidence. In general, this systematic review showed a high concordance between diagnoses achieved by using WSI and conventional light microscope (CLM), summarizes difficulties related to specific findings of certain areas of pathology—including dermatopathology, pediatric pathology, neuropathology, and gastrointestinal pathology—and demonstrated that WSI can be used to render primary diagnoses in several subspecialties of human pathology. 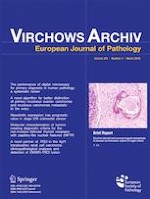 Histological characteristics of eosinophilic myenteric ganglionitis: an under-recognised cause of chronic intestinal pseudo-obstruction

AL amyloidosis with a localized B cell neoplasia

A novel partner of TFE3 in the Xp11 translocation renal cell carcinoma: clinicopathological analyses and detection of EWSR1-TFE3 fusion