Infants with acute lymphoblastic leukemia (ALL) treated with high-dose methotrexate may have reduced methotrexate clearance (CL) due to renal immaturity, which may predispose them to toxicity.

The aim of this study was to develop a population pharmacokinetic (PK) model of methotrexate in infants with ALL.

A total of 672 methotrexate plasma concentrations were obtained from 71 infants enrolled in the Children’s Oncology Group (COG) Clinical Trial P9407. Infants received methotrexate 4 g/m2 intravenously for four cycles during weeks 4–12 of intensification. A population PK analysis was performed using NONMEM® version 7.4. The final model was evaluated using a non-parametric bootstrap and a visual predictive check. Simulations were performed to evaluate methotrexate dose and the utility of a bedside algorithm for dose individualization.

Methotrexate was best characterized by a two-compartment model with allometric scaling. Weight was the only covariate included in the final model. The coefficient of variation for interoccasion variability (IOV) on CL was relatively high at 25.4%, compared with the interindividual variability for CL and central volume of distribution (10.7% and 13.2%, respectively). Simulations identified that 21.1% of simulated infants benefitted from bedside dose adjustment, and adjustment of methotrexate doses during infusions can avoid supratherapeutic concentrations. 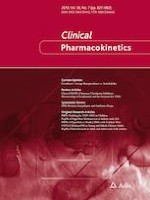 Levothyrox® New and Old Formulations: Are they Switchable for Millions of Patients?

Authors’ Reply to Castello-Bridoux et al.: “Comment on Levothyrox® New and Old Formulations: Are they Switchable for Millions of Patients?”

Comment on “Levothyrox® New and Old Formulations: Are They Switchable for Millions of Patients?”

Interactions Between Antiepileptic and Antibiotic Drugs: A Systematic Review and Meta-Analysis with Dosing Implications