Docetaxel, cisplatin and fluorouracil (DCF) is a candidate neoadjuvant chemotherapy (NAC) regimen for esophageal squamous cell carcinoma (ESCC). Although the efficacy and safety of DCF have been reported, the markers that predict the patient’s response are still unknown. The aim of this study was to identify the predictive markers for a response to NAC with DCF in patients with ESCC.

The presence of serum p53 antibody can be used as a novel, noninvasive predictor of the pathological tumor response to NAC with DCF in ESCC patients. 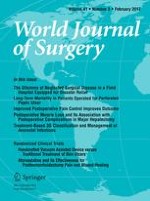