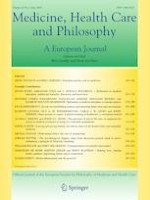 Me? The invisible call of responsibility and its promise for care ethics: a phenomenological view

Research ethics aspects of experimentation with LSD on human subjects: a historical and ethical review

Rethinking the doctor–patient relationship: toward a hermeneutically-informed epistemology of medical practice

Obesity, political responsibility, and the politics of needs