The quality of care for adults with epilepsy: an initial glimpse using the QUIET measure | springermedizin.de Skip to main content
TOOLBAR 1 2 3 4
SUCHE MENÜ 1 2 3 4

Data from the electronic medical record of a single medical center in the northeastern United States were used in this study to identify patients with epilepsy and assess the extent to which recommended processes of care were performed. The electronic medical record includes templates for certain aspects of care such as vital signs, medications, and lab tests. However, as progress notes are not disease specific or used for examining quality of care at the institution, they are primarily free text, which allows substantial variation in documentation of the care provided. Data were acquired from the demographic information, diagnosis codes, patient problem list, pharmacy, laboratory, inpatient, and outpatient components of the medical record. These data were entered into a specially designed chart abstraction form, and entered into a spreadsheet and exported to SPSS (Version 17.0, Chicago, IL) for subsequent analysis. This study was approved by the Institutional Review Board of the Medical Center.

Eligible participants received care at the medical center, were at least 18 years of age, able to speak English and, due to an additional component of the larger study, were able to complete a telephone interview. Probable epilepsy patients were identified by searching the electronic medical record system for all patients who had at least one ICD-9 code of 345.x or 780.39, or mention of the terms "epilepsy" or "seizure disorder" in the medical record problem list between 2004 and 2007. In order to assure there would be adequate data to assess the quality of epilepsy care we further required that individuals have two or more visits to the primary care or neurology clinics, or one visit to the primary care or neurology clinic and at least one hospitalization [ 17] between 2004 and 2007.
Individuals identified as eligible for the study based on diagnosis of epilepsy and who were confirmed to have epilepsy by their primary care provider or neurologist and received a letter from their physician informing them about the study and inviting their participation. Chart abstractions examining the quality of epilepsy care were completed by trained clinical chart abstractors only for those participants who contacted the study team after receiving the letter and provided written consent to participate in the study.

QUIET quality indicators were developed using the RAND appropriateness method-a process that integrates a systemic literature review with an expert consensus process to identify items that are considered appropriate and feasible measures of quality healthcare. Since existing evidence based guidelines from international sources existed, we adapted some items from those existing guidelines (e.g,, National Institute for Clinical Excellence [NICE] and Scottish Intercollegiate Guidelines Network [SIGN]), for use in the US healthcare setting [ 8, 9]. Other items were developed using systematic literature review. A panel of 10 epilepsy experts and 1 primary care provider completed three rounds of ratings to identify items for which there was consensus regarding appropriateness, feasibility and necessity. Additional file 1 shows the QI's that were rated appropriate and feasible indicators of epilepsy care quality, and further identifies QI's that were adapted from the NICE or SIGN guidelines, and items which are parallel to measures included in the Quality and Outcomes Framework measure used in the United Kingdom [ 18]. Additional detail about this process is provided elsewhere [ 19].
Anzeige
Because of the large number of individual evidence-based QI's during the development of the quality measures, we categorized the 22 QI's into four aspects of epilepsy care: First Seizure Assessment (3 QI's), Initial Epilepsy Treatment (7 QI's), Chronic Epilepsy Care (9 QI's), and Aspects of Care Unique to Women (3 QI's). Additional file 1 shows specific QI's for each aspect of care.

Prior to chart abstraction, the research team consisting of physicians, nurses and health services researchers with expertise in conducting chart abstractions created operational definitions that identified specific data elements that would be used to score each QI. These definitions were then used to determine if applicable conditions were present for measuring each QI (i.e. the IF portion of the quality indicator), and then whether the process of care defined by the quality indicator was provided (i.e. the THEN portion). For example: IF the patient is diagnosed with a seizure disorder/epilepsy and started on therapy (denominator) THEN the patient should be treated with monotherapy (numerator). Thus, there was variation in the denominator by QI. While some QI's focused on a single visit (at the time of the first seizure), most QI's examined the construct in question over time. For instance, a number of QI's recommended that a certain type of care be provided on a yearly basis (e.g. yearly depression screening). For these, we assessed visits within the designated time frame. Thus, our analysis is at the patient level for each QI, and the total number of individuals who met criteria for each QI was unique.
A specially designed chart abstraction instrument was developed, and data regarding processes of care provided was collected and entered using Microsoft Access. Research assistants with clinical background were specifically trained to perform chart reviews (Additional file 2). The final chart abstraction instrument was subjected to multiple layers of review by the research team. Initially, 25 charts were reviewed by two raters to assess concordance. Comparison of ratings for the quality indicators in those charts found that raters agreed 76% of the time. After finalization of the instrument, a second review of 25 charts conducted by independent raters found that there was agreement on 86% of ratings.
Initial assessment of concordance between QI's and care provided used an all-or- nothing approach: if all aspects of care were performed, the patient received a positive score for that indicator unless the indicator specifically stated that one of several aspects of care would fulfill the requirement (e.g. QI15; see Additional file 1). However, we also examined the proportion of recommended processes of care completed for each of the four aspects of epilepsy care described above.

Demographic characteristics including age, sex, race/ethnicity, marital status, and education were abstracted from the electronic medical record. Epilepsy history (new-onset vs. chronic care), type of seizure (if documented), and medication information was ascertained based on longitudinal review of medical records and intake history for patients new to the medical center. Finally, the presence of continued seizures was identified by documentation of seizures in the medical record during the study period.

Epilepsy care was identified by review of outpatient progress notes that described epilepsy and epilepsy care. For each epilepsy-focused medical encounter (encounter in which progress notes mentioned epilepsy) within the healthcare system, the type of provider was defined as being a primary care provider (general internist, family practitioner, or nurse practitioner), neurologist, or other specialty care. Individuals who received care only within primary care or neurology settings were classified as such. Those receiving epilepsy care in both settings were classified as receiving shared care.

We first describe the variation in concordance among individual QI's (i.e., the concordance between the recommended and actual care received), followed by examination of the proportion of patients who received the care outlined for each aspect of epilepsy care (First Seizure, Initial Epilepsy Treatment, Chronic Care, Aspects of Care Unique to Women; Additional file 1 shows indicators included in each aspect of care). This analysis was conducted at the patient level, but included all recommended aspects of care for which each patient was eligible based on the individual indicators in each aspect of epilepsy care. This process is described in more detail below. Finally, we examine receipt of care by the setting of epilepsy care received using the chi square statistic. Haberman's adjusted residual statistic was used to identify significant cells within the chi-square analysis [ 20]. SPSS ® version 17 (Chicago, IL, USA) was used to conduct data analysis.

This study provides a snapshot of the quality of care provided to adults with epilepsy in one metropolitan healthcare system. While results are only from a single hospital, these findings suggest that assessment of quality using most of the QUIET QI's is feasible, and that care for epilepsy can in large part be reliably measured using medical chart abstraction. This tool will allow identification of gaps in quality for epilepsy care within other healthcare systems, and eventually it can be used to improve the care provided for adults with epilepsy. However additional evaluation of the QUIET measure using patient surveys and development of QI's for use in specialty care is also needed.

Funding for this study was provided by the Centers for Disease Control and Prevention (PI: Dr. Lewis Kazis). We thank David Thurman, MD, MPH for his thoughtful review of this manuscript. This material is the result of work supported with resources and the use of facilities at the South Texas Veterans Health Care System and the Center for Health Quality, Outcomes and Economic Research (CHQOER), Edith Nourse Rogers VA Medical Center Hospital. The views expressed in this article are those of the authors and do not necessarily reflect the position or policy of the Centers for Disease Control and Prevention or the Department of Veterans Affairs or the United States government.
This article is published under license to BioMed Central Ltd. This is an Open Access article distributed under the terms of the Creative Commons Attribution License ( http://​creativecommons.​org/​licenses/​by/​2.​0), which permits unrestricted use, distribution, and reproduction in any medium, provided the original work is properly cited. 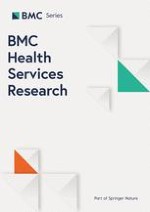 The implementation of integrated care: the empirical validation of the Development Model for Integrated Care

Does quality of care for hypertension in primary care vary with postcode area deprivation? An observational study

Clinicians adopting evidence based guidelines: a case study with thromboprophylaxis