In the last decades, near infrared spectroscopy (NIRS) monitoring has gained interest as a tool to monitor cerebral oxygenation and perfusion during cardiac surgery in an attempt to minimize cerebral complications [ 1– 4]. NIRS works by measuring cerebral tissue oxygen saturation (ScO 2) and reflects an approximately 25/75 arterial/venous saturation ratio, depending on the device used [ 5, 6]. Numerous intervention algorithms to mitigate and reverse cerebral desaturation have been published, of which the one published in 2007 appears widely adopted [ 7]. Application of this hierarchical algorithm has lowered the time with cerebral desaturation measured by NIRS [ 8– 11]. However, it is not clear which part(s) of the algorithm is the successful one to convert an ongoing desaturation. Part of the intervention algorithm is to increase cardiac output (CO) if cerebral desaturation occurs as indicated by decreased ScO 2. However, this intervention per se has been tested primarily in non-cardiac surgery with diverging findings [ 12– 15].
The aim of this study was to elucidate the difference in ScO 2 after versus before a standardized 5 mL/kg ideal body weight fluid challenge (FC). Furthermore, we studied the association between relative changes in ScO 2 and CO during a standardized FC in hemodynamic responders and non-responders to a FC in adult patients undergoing cardiac surgery. Responders were defined as patients with an increase in stroke volume, SV > 10% following FC.
Anzeige
We hypothesized that in responders ScO 2 would increase, as opposed to non-responders. Furthermore, we hypothesized that relative changes of CO and ScO 2 would correlate.

This study is a retrospective substudy of the FLuid Responsiveness Prediction Using Extra Systoles (FLEX) trial [ 16]. The trial was conducted at the University Medical Center Groningen (UMCG), The Netherlands between January 2017 and June 2017. The FLEX study was approved by the local Institutional Review Board (METc UMCG number 2016.449, ABR number NL58966.042.16) and registered at http://​ClinicalTrial.​gov (NCT03002129).

All participants in the FLEX trial were older than 18 years of age and scheduled for elective coronary artery bypass grafting with no additional procedures, with or without the use of cardiopulmonary bypass (CPB). Exclusion criteria were preoperative left ventricular ejection fraction < 35%, kidney function requiring haemodialysis, and heart rhythm disturbances such as atrial fibrillation or frequent extra systoles. Written informed consent was obtained from all patients included.

The study protocol and the primary results from the FLEX trial have been previously published [ 16]. In short, all patients received a standardized FC (5 mL/kg ideal body weight of lactated Ringer; Baxter, Utrecht, The Netherlands) at two time points during surgery. FC1: after induction of anaesthesia and placement of the central venous catheter and before surgical incision. FC2: during preparation of the left internal mammarian artery. Changes to all other infusion rates as well as vasoactive interventions were avoided during the infusion periods, which were approximately 5 min.
Anzeige

NIRS monitoring was obtained with self-adhesive sensors (Medtronic/Covidien INVOS Cerebral/Somatic Oximetry Adult Sensors—Medtronic, Minneapolis, USA) placed bilaterally on the patient’s forehead before induction of anaesthesia. The sensors were connected to a Covidien/Medtronic INVOS 5100c Cerebral/Somatic Oximeter monitor (Medtronic, Minneapolis, USA). Data was recorded in the electronic hospital patient data management system developed to sample data during cardiac surgery (CAROLA, RIVM Centrum Extreme Veiligheid, Bilthoven, The Netherlands) with ScO 2 baseline marked before anaesthesia related preoxygenation and sampled every 30 s and no in-unit data storage was used. Data was exported to Excel format after surgery.
All variables analysed were mean values of left and right channel. In case a patient had only unilateral NIRS readings one channel was used for analysis.

2.4.2 Hemodynamic measurements and alignment to the NIRS readings

All patients were equipped with FloTrac sensors, which were connected to the EV1000 hemodynamic monitor (both Edwards Lifesciences, Irvine, USA) for continuous measurement of SV, CO, and mean arterial pressure (MAP). The EV1000 monitor sampled data every 20 s and all data was later exported to Excel format. FC was marked in the monitor system. MAP was also recorded by the CAROLA system and therefore MAP time series were used to align data for CO from the EV1000 monitor and ScO 2 values from the CAROLA system. All values were analysed from the last registered value before FC start and then for the following period of the FC in 1-min intervals. Last extracted value was the first value registered after FC was ended.
Not all patients had complete NIRS readings and hemodynamic data, since the use of NIRS was dependent on the preference of the anaesthetist. To maximize the output from the available data FC1 and FC2 were pooled for analysis.
Haematocrit levels from arterial blood gasses were extracted from the CAROLA system as the first and last value accessible in the procedure.

The primary outcome was to evaluate relative changes in ScO 2 during two FCs. Furthermore, the absolute difference in ScO 2 was evaluated for each individual as well as the correlation of ScO 2 and CO.

Statistical analyses were performed using SPSS (IBM Corp. Released 2013. IBM SPSS Statistics for Windows, Version 22.0. Armonk, NY: IBM Corp.).
All analyses were conducted for the whole sample of datasets and subsequently stratified for non-responders and fluid responders, except for correlation analysis which was conducted for the whole sample only.
The normality of data distribution was evaluated by visual inspection of quantile–quantile plots. Normally distributed data are presented as mean ± standard deviation (SD), otherwise as median and interquartile range (IQR). Normally distributed data were compared with paired sample t test for difference between different time points. Student’s t-test was used to test for difference between groups. Categorical data are presented as numbers and percentages and compared with Pearson’s Chi square test or Fisher’s exact test. Statistical significance was assessed at the 5% level.
Correlation was tested with the Pearson correlation coefficient.
No sample size calculation was performed since this study was a secondary analysis of an already finished trial. Statistical power is expressed through the reported confidence intervals.

Sixty-one patients were included in the FLEX study. Twenty-seven patients had complete sets of hemodynamic data and NIRS data at FC1. At FC2, 29 patients had complete datasets. In total, this allowed analysis of 56 complete datasets comprising 29 non-responders and 27 fluid responders datasets from 31 unique patients.
Preoperative characteristics, medication, comorbidity and intraoperative data are presented in Table  1 for patients with complete datasets at both FC1 and FC2 (n = 25). Tables 1A and 1B (Appendix S1) illustrate that there was no difference in any of the pre-operative variables for non-responders vs. fluid responders at either FC1 or FC2.
Table 1
Patient characteristics
Values are presented as means with ± standard deviation and frequency with (percentage)
FC fluid challenge, BMI body mass index, ACE angiotensin-converting-enzyme, ASA American Society of Anaesthesiologist classification of physical health, COPD chronic obstructive pulmonary disease, Hct haematocrit, OPCABG off-pump coronary artery bypass grafting
Table  2 illustrates the difference in absolute values and relative changes for CO and ScO 2 before and after FC. In general, CO and MAP increased significantly for both non-responders and responders. CO before FC for fluid responders were markedly lower than the corresponding CO for non-responders (3.3 ± 0.8 L/min vs. 4.5 ± 1.4 L/min, p < 0.001).
Table 2
Analysed variables before fluid challenge and immediately after fluid challenge
Values are presented as means with ± standard deviation
FC fluid challenge, CO cardiac output, CI cardiac index, SV stroke volume, SVI stroke volume index, MAP mean arterial pressure, HR heart rate, ScO 2 cerebral oxygen saturation, bpm beats per minute
aIndex value: before FC = index 100
Anzeige
The differences in relative changes in ScO 2 for fluid responders (mean difference 1.6% and 95% CI − 0.3; 3.4, p = 0.088) and non-responders (mean difference − 0.3% and 95% CI − 1.2; 0.6, p = 0.534) was not significant. The ScO 2 difference in absolute values before and after FC was not significant for either fluid responders (66 ± 7% vs. 67 ± 6%, p = 0.084) or non-responders (66 ± 6% vs. 66 ± 7%, p = 0.555).
CO and ScO 2 obtained at the end of FC as relative change to the value before FC are plotted in Fig.  1 and the correlation coefficient was 0.295, p = 0.027. In Fig.  2 (fluid non-responders) and Fig.  3 (fluid responders) the relative changes minute by minute during the FC are presented, showing that the correlations are driven by the fluid responders.
×
×
×

TWLS received Research Grants and Honoraria from Edwards Lifesciences (Irvine, CA, USA) and Masimo, Inc. (Irvine, CA, USA) for consulting and lecturing and from Pulsion Medical Systems SE (Feldkirchen, Germany) for lecturing in the past. TWLS is Associate Editor of the Journal of Clinical Monitoring and Computing but had no role in the handling of this paper.

All procedures performed in studies involving human participants were in were in accordance with the Ethical Standards of the Institutional and/or National Research Committee and with the 1964 Helsinki Declaration and its later amendments or comparable ethical standards.

Informed consent was obtained from all individual participants included in the present study.
Open AccessThis article is distributed under the terms of the Creative Commons Attribution 4.0 International License ( http://​creativecommons.​org/​licenses/​by/​4.​0/​), which permits unrestricted use, distribution, and reproduction in any medium, provided you give appropriate credit to the original author(s) and the source, provide a link to the Creative Commons license, and indicate if changes were made. 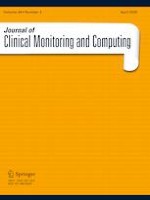 Neuroanesthesiologists as interoperative neurophysiologists: a collaborative cognitive apprenticeship model of training in a community of clinical practice

Complementary deformation of tracheal tubes and flexible introducers: a prerequisite to a secured guided tracheal intubation