The datasets generated during the current study are not publicly available due to regulations on personal data protection but are available from the corresponding author on reasonable request.

Available from the corresponding author upon request.

Adolescent young adults (AYA) with Hodgkin lymphoma (HL) are treated according to either pediatric or adult protocols, however, the best strategy has yet to be established. We describe the AYA patients referred for radiotherapy and quantify the risk of radiation-induced late effects and the corresponding life years lost (LYL) following pediatric and adult regimens.

Patients ≤24 years irradiated for HL were included. For each patient, organs at risk (OARs) were contoured and dosimetric parameters were extracted. Estimated excess hazard ratios of radiation-induced late effects were calculated from dose-response models and LYL attributable to various late effects were estimated.

In total, 77 patients were analyzed (pediatric regimen: 15; adult regimen: 62). Age, clinical stage, and the number of patients enrolled in protocols were significantly different between the groups. Pediatric patients had more advanced disease, which resulted in larger target volumes and higher doses to most OARs, despite a lower prescribed dose compared to adult regimens. LYL estimates were all higher with the pediatric regimens. Total LYL with pediatric and adult treatment regimens were 3.2 years and 2.3 years, respectively. Due to the clinical stage variation and heterogeneity in disease location, a direct comparison of the estimated risks of late effects was only exploratory. 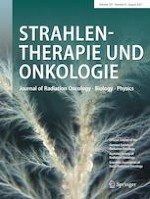 Peer review analysis in the field of radiation oncology: results from a web-based survey of the Young DEGRO working group