Titel
The Role and Influence of the Mother in the Development of the Fetus: Comparative Study of Qur’an, Hadiths, and Modern Medical Perspectives
Autoren:
Nafiseh Pakravan
Morteza Motaharipour 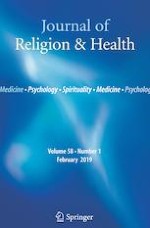 An Exploratory Study of Spirituality and Spiritual Care Among Malaysian Nurses

Both Intrinsic and Extrinsic Religious Orientation are Positively Associated with Attitudes Toward Cleanliness: Exploring Multiple Routes from Godliness to Cleanliness

Ramadan Fasting Effects on Postural Control in the Elderly: A Comparison Between Fallers and Non-fallers