Acute and chronic inflammatory responses in the lung are associated with the accumulation of large quantities of immune and structural cells undergoing apoptosis, which need to be engulfed by phagocytes in a process called ‘efferocytosis’. Apoptotic cell recognition and removal from the lung is mediated predominantly by airway macrophages, though immature dendritic cells and non-professional phagocytes, such as epithelial cells and mesenchymal cells, can also display this function. Efficient clearance of apoptotic cells from the airways is essential for successful resolution of inflammation and the return to lung homeostasis. Disruption of this process leads to secondary necrosis of accumulating apoptotic cells, release of necrotic cell debris and subsequent uncontrolled inflammatory activation of the innate immune system by the released ‘damage associated molecular patterns’ (DAMPS). To control the duration of the immune response and prevent autoimmune reactions, anti-inflammatory signalling cascades are initiated in the phagocyte upon apoptotic cell uptake, mediated by a range of receptors that recognise specific phospholipids or proteins externalised on, or secreted by, the apoptotic cell. However, prolonged activation of apoptotic cell recognition receptors, such as the family of receptor tyrosine kinases Tyro3, Axl and MerTK (TAM), may delay or prevent inflammatory responses to subsequent infections. In this review, we will discuss recent advances in our understanding of the mechanism controlling apoptotic cell recognition and removal from the lung in homeostasis and during inflammation, the contribution of defective efferocytosis to chronic inflammatory lung diseases, such as chronic obstructive pulmonary disease, asthma and cystic fibrosis, and implications of the signals triggered by apoptotic cells in the susceptibility to pulmonary microbial infections. 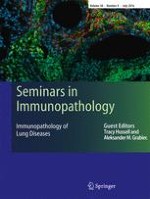 Type 2 innate lymphoid cells: at the cross-roads in allergic asthma

Immunopathology of lung diseases: introduction for the special issue