The Role of Aprepitant in Prevention of Postoperative Nausea and Vomiting After Bariatric Surgery | springermedizin.de Skip to main content
TOOLBAR 1 2 3 4
SUCHE MENÜ 1 2 3 4

Postoperative nausea and vomiting (PONV) is common with bariatric surgery. We examined the PONV rate in bariatric surgical patients who received triple antiemetic prophylaxis (dexamethasone, droperidol, and ondansetron) with and without antiemetic aprepitant.

Addition of aprepitant to a multimodal antiemetic prophylactic regimen may be associated with significant reduction of PONV during early recovery and potentially with reduced incidence of vomiting during the first 48 postoperative hours. The high PONV rate in the first 48 postoperative hours is suggestive that introduction of scheduled anti-PONV prophylactic treatment may be desirable. 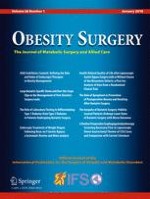 The Forgotten Fundus—Response to - Obesity Treatment with Botulinum Toxin-A Is Not Effective: a Systematic Review and Meta-analysis

Bariatric Surgery Promising in Migraine Control: a Controlled Trial on Weight Loss and Its Effect on Migraine Headache

Time to Extubation—What Causes the Variations?