Head injury is a significant economic, social, and medical problem in developing countries and remains one of the leading causes of pediatric morbidity and mortality. The association of traumatic brain injury and coagulopathy in children is linked with an increase in mortality and poor functional outcomes. However, its impact on long-term outcome has not been discussed in the literature so far.

The aim of this paper was to investigate the effect of coagulopathy diagnosed by routine laboratory tests on neurological outcome following traumatic brain injury in children.

A retrospective review was carried out using medical records of children with a traumatic brain injury admitted at a level I trauma center, between January 2013 and December 2016, submitted to any neurosurgical procedures. Statistical analysis was performed accordingly to identify factors predicting unfavorable or favorable outcomes at 1- and 6-month follow-ups. Data regarding age, gender, trauma mechanism, Glasgow Coma Scale at admission and at discharge, highest and lowest stable intracranial pressure, serum glucose and coagulation assessment, radiological findings, and length of stay were analyzed.

We identified 66 children with surgical head trauma. Mean age was 10.9 years (ranges from 3 months to 17 years), with male predominance (77.3%). Common mechanisms were road traffic accidents (66.7%), falls (19.7%), and blunt trauma (10.6%). Brain edema was detected in 68.2% of the patients, surgical fractures or intracranial bleeding in 75.8%. ICP monitoring was performed in 24.2% of the patients, and of these, 18.7% underwent consecutive decompressive craniectomy. Mean length of in-patient treatment was 16.3 ± 28.2 days. At 1- and 6-month follow-ups, favorable outcome was detected in 71.2 and 78.7% of the patients, respectively. The mortality rate was 12.1%. Routine coagulation assessments such as prothrombin time, fibrinogen levels, and thrombocyte count upon admission were potential prognostic variables identified.

The present study concluded that a trauma-related coagulopathy is an important predictor of unfavorable neurological outcome following TBI in pediatric patients. Initial GCS score, age, and neuroradiological findings, such as severe brain edema and different types of intracranial bleeding, correlated with GOS in the first 6 months following TBI. Sustained intracranial hypertension also predicted unfavorable outcome and death in this series. 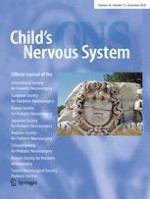 Giant arachnoid granulation in a child with benign intracranial hypertension: an unusual case

Embryonal tumor with multilayered rosettes: illustrative case and review of the literature