A general assumption in visual neuroscience is that basic receptive field properties such as orientation and direction selectivity are constructed within intrinsic neuronal circuits and feedforward projections. In addition, it is assumed that general neuronal excitability and responsiveness in early visual areas is to a great extent independent of feedback input originating in areas higher in the stream. Here, we review the contribution of feedback projections from MT, V4 and pulvinar to the receptive field properties of V2 neurons in the anesthetized and paralyzed monkey. Importantly, our results contradict both of these assumptions. We separately inactivated each of these three brain regions using GABA pressure injections, while simultaneously recording V2 single unit activity before and hours after inactivation. Recordings and GABA injections were carried out in topographically corresponding regions of the visual field. We outline the changes in V2 activity, responsiveness and receptive field properties for early, mid and late post-injection phases. Immediately after injection, V2 activity is globally suppressed. Subsequently, there is an increase in stimulus-driven relative to spontaneous neuronal activity, which improves the signal-to-noise coding for the oriented moving bars. Notably, V2 tuning properties change substantially relative to its pre-injection selectivity profile. The resulting increase or decrease in selectivity could not be readily predicted based on the selectivity profile of the inactivated site. Finally, V2 activity rebounds before returning to it pre-injection profile Our results show that feedback projections profoundly impact neuronal circuits in early visual areas, and may have been heretofore largely underestimated in their physiological role. 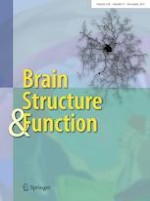 The relationship between transcription and eccentricity in human V1

Structure and function of neural circuit related to gloss perception in the macaque inferior temporal cortex: a case report

Vision for action: thalamic and cortical inputs to the macaque superior parietal lobule