The purpose of the study was to determine: (1) the relationship between ankle plantarflexor muscle strength and Achilles tendon (AT) biomechanical properties in older female adults, and (2) whether muscle strength asymmetries between the individually dominant and non-dominant legs in the above subject group were accompanied by inter-limb AT size differences.

The maximal generated AT force, AT stiffness, AT Young’s modulus, and AT cross-sectional area (CSA) along its length were determined for both legs in 30 women (65 ± 7 years) using dynamometry, ultrasonography, and magnetic resonance imaging.

No between-leg differences in triceps surae muscle strength were identified between dominant (2798 ± 566 N) and non-dominant limb (2667 ± 512 N). The AT CSA increased gradually in the proximo-distal direction, with no differences between the legs. There was a significant correlation (P < 0.05) of maximal AT force with AT stiffness (r = 0.500) and Young’s modulus (r = 0.414), but only a tendency with the mean AT CSA. However, region-specific analysis revealed a significant relationship between maximal AT force and the proximal part of the AT, indicating that this region is more likely to display morphological adaptations following an increase in muscle strength in older adults.

These findings demonstrate that maximal force-generation capabilities play a more important role in the variation of AT stiffness and material properties than in tendon CSA, suggesting that exercise-induced increases in muscle strength in older adults may lead to changes in tendon stiffness foremost due to alterations in material rather than in its size. 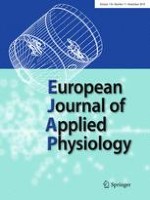