The Role of the Epiglottis in the Swallow Process after a Partial or Total Glossectomy Due to a Neoplasm | springermedizin.de Skip to main content
TOOLBAR 1 2 3 4
SUCHE MENÜ 1 2 3 4

Repeatable epiglottic movement patterns were recorded during a videofluoroscopic swallow evaluation of 95 patients who had undergone a total or partial glossectomy due to a neoplasm. Because no epiglottic function assessment was performed preoperatively, for the purpose of this study it was assumed that epiglottic mobility was “normal” during this time and that all abnormalities found afterward resulted from the growth of the neoplasm and the glossectomy. It was noted that in the early postoperative period, absence of epiglottic movement was accompanied by aspiration and made swallowing incompetent in a majority of cases (9 of 10). A correlation of movement between the epiglottis and the extent of oral tissue excision was found. Epiglottic mobility was evaluated as “normal” in 72% of the patients, i.e., in 67 of 91 (74%) patients after a partial or nearly total glossectomy and in 1 of 4 people who underwent a total glossectomy. In the subgroup (16%) of patients who underwent a total or nearly total glossectomy and then had videofluoroscopic examinations, 60% of the cases had normal epiglottic movements and 40% had an immobile epiglottis. Compensatory mechanisms implemented by the patients on their own initiative, such as additional swallows and prolonged apnea during deglutition, enabled them to avoid aspiration. However, upward head movement and downward chin tilting during deglutition as compensatory mechanisms used by patients with no epiglottic movement did not reduce the aspiration risk in the early postoperative period and were found to accompany incompetent swallowing attempts.

Titel
The Role of the Epiglottis in the Swallow Process after a Partial or Total Glossectomy Due to a Neoplasm
Autoren:
Ludmiła Halczy-Kowalik
Mieczysław Sulikowski
Rościsław Wysocki
Violetta Posio
Robert Kowalczyk
Anna Rzewuska 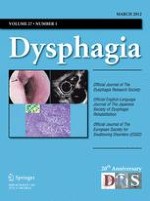 The Effect of Saliva on the Viscosity of Thickened Drinks

An Uncommon Cause of Dysphagia