This study was reported by using the Strengthening the Reporting of Observational Studies in Epidemiology (STROBE) checklist for cohort studies [ 9].

The inclusion criteria were adults with distal humerus fracture cases that underwent ORIF with plates. The included fracture patterns were OTA/AO type 13A2, 13A3, 13B2, 13C1, 13C2, and 13C3. Fracture types 13A1, 13B1, and 13B3 were not included as medial plate fixation or ulnar nerve transposition is not warranted. The exclusion criteria were cases with pre-operative ulnar nerve neuropathy, previous central or peripheral neuropathy, treatment with a lateral plate only, treatment with a construct other than plates, and with incomplete documentation of pre-operative ulnar neuropathy (Fig. 1).
×
Anzeige

A posterior approach to the elbow was utilized in most fracture patterns. A triceps-sparing approach with medial and/or lateral windows or an olecranon osteotomy was used depending on the surgeon’s discretion and the fracture comminution for OTA/AO type 13A or 13C fractures. However, a medial elbow approach was used for OTA/AO 13B fractures which involved isolated medial columns. Fixation was achieved with several plating configurations which were both dependent on the surgeon’s intra-operative decision and the fracture configuration. Isolated medial plating was used in specific OTA/AO type 13A or 13B medial column isolated fractures. Parallel 180° (Fig.  2) or orthogonal 90°–90° (Fig.  3) plating techniques were reserved for the vast majority of OTA/AO type 13A and 13C fractures.
×
×
In all procedures, the ulnar nerve firstly decompressed at the cubital tunnel, followed by careful dissection proximally along the medial border of the triceps. The ulnar nerve was mobilized throughout the procedure with a vessel loop or a Penrose drain. At the conclusion of the surgery, the ulnar nerve is either managed with subcutaneous anterior transposition or with no transposition and retaining the nerve in its original position (Fig.  4). In the non-transposition group, the ulnar nerve was returned to its original position behind the medial epicondyle, whereas the subcutaneous anterior transposition group entailed the utilization of fascial wrapping. Firstly, the ulnar nerve was ensured to be easily transposable anteriorly. The fascia of the flexor pronator mass origin was exposed and separated of the overlying subcutaneous tissues. Approximately a 2 × 2-cm trap door of fascia was created with its base attached to the medial epicondyle. Afterward, the ulnar nerve was transposed anteriorly, and the fascial flap was sutured to the overlying subcutaneous tissues, thus covering the ulnar nerve. The surgeons who performed the procedures were attending trauma orthopedic surgeons. The decision for transposition or type of plating was at the surgeon’s discretion.
×

The data source was our institution’s electronic medical records. The operative database was searched from 2011 until 2018 with the keywords “humerus” and “fractures” to identify all potential cases. The pre-operative assessments, operative notes, and post-operative assessments were reviewed.
The baseline variables that were collected included age, sex, fracture type according to the OTA/AO classification, open/closed fractures, ipsilateral upper limb injuries, presence of polytrauma, number of procedures, plate configuration, and the use of an olecranon osteotomy.
Exposure variables were either subcutaneous anterior transposition of the ulnar nerve or no transposition. Outcome variables such as the rate of post-operative ulnar nerve neuropathy were documented post-operatively through physical examination. The ulnar nerve neuropathy was graded according to the McGowan classification [ 10] into three grades: grade 1 indicating subjective ulnar nerve sensory symptoms; grade 2 as objective ulnar nerve sensory symptoms and weakness with or without hand intrinsic muscle atrophy; and grade 3 as severe sensorimotor deficit with paralysis of the hand muscle supplied by the ulnar nerve. Other outcome variables included the rate of ulnar neuropathy recovery and reoperations. Due to the retrospective nature of this study, we could not obtain electromyographic evidence of post-operative neuropathic dysfunction.

The statistical analysis was performed with Stata/IC (StataCorp. 2019. Stata Statistical Software: Release 16. College Station, TX: StataCorp LLC.). Continuous variables were reports with means and SD, and dichotomous variables were reported as proportions. The two group t test or the Mann-Whitney U test was used for comparing continuous variables, whereas the chi-square or the Fischer’s exact tests were used for comparing proportions depending on the normality of the data. A logistic regression model was designed to evaluate the effect of ulnar nerve transposition on the development of ulnar nerve dysfunction while adjusting for age, sex, fracture type, presence of open fractures, polytrauma, ipsilateral limb injuries, and plate configuration. The effect of ulnar nerve transposition or not was estimated with odds ratio (OR) at a 95% confidence interval (CI). In addition, a difference with a P value < 0.05 was considered statistically significant.

A total of 173 cases were identified in our database search that was labeled as distal humerus fractures. Of the total identified patients, 76 patients were excluded as they did not meet the eligibility criteria. The reasons for exclusion were ineligible fracture types in 53 patients, treated with a construct other than dual plates or isolated medial plates in 12 patients, pre-operative ulnar nerve neuropathy in eight patients, and three patients were polytraumatized and treated while intubated. Thus, the total number of eligible patients for inclusion was 97 cases with distal humerus fractures (Fig.  1). Of the total included sample, 28 patients underwent subcutaneous ulnar nerve anterior transposition at the time of ORIF, whereas 69 patients had no nerve transposition.

Patients’ characterstics are summarized in Table 1. The mean age was 35.8 years (17–82) with most patients being males (75%). Most fractures were closed (69%) with the most prevalent fracture type being OTA/AO type C1 followed by C2 and C3. Fracture types OTA/AO A2, A3, and B2 were less common. Regarding associated injuries, polytrauma was present in 28%, and associated ipsilateral upper limb injuries were present in 20%.
Table 1
Baseline patients’ characteristics
All statistical comparisons were performed with a Fischer’s exact test unless stated otherwise
Bold text signifies a significant P value
†Two group t test
Anzeige
Orthogonal 90°–90° plating was the most common plate configuration in the no transposition group (52.2% versus 25%); however, parallel plating 180° was significantly more prevalent in the transposition group (60.7% versus 43.5%). Isolated medial plating was the least utilized plating configuration. An olecranon osteotomy was utilized in 44.3% of cases, 52.5% had no olecranon osteotomy, and 2% of fractures had an associated olecranon fracture.

We would like to thank our colleague Elhadi Babikir MD for providing intra-operative images of ulnar nerve in situ decompression and transposition.

The dataset available as supplementary material.

This study was approved by the institutional review board (MRC-01-19-101).

Obtained from our institutional review board.
Open Access This article is licensed under a Creative Commons Attribution 4.0 International License, which permits use, sharing, adaptation, distribution and reproduction in any medium or format, as long as you give appropriate credit to the original author(s) and the source, provide a link to the Creative Commons licence, and indicate if changes were made. The images or other third party material in this article are included in the article's Creative Commons licence, unless indicated otherwise in a credit line to the material. If material is not included in the article's Creative Commons licence and your intended use is not permitted by statutory regulation or exceeds the permitted use, you will need to obtain permission directly from the copyright holder. To view a copy of this licence, visit http://​creativecommons.​org/​licenses/​by/​4.​0/​. 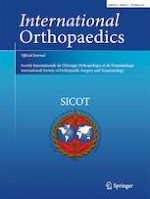 Comment on an article: “Medications in COVID-19 patients: summarizing the current literature from an orthopaedic perspective”