Cerebral radiation necrosis (CRN) is a known complication of radiation therapy. Treatment options are limited and include steroids, bevacizumab, and surgery. This study seeks to determine the safety of laser interstitial thermal therapy (LITT) for CRN and identify the pattern of post-ablation volume change over time. Patients undergoing LITT for tumor treatment at Henry Ford Hospital between November 2013 and January 2016 with biopsy-confirmed CRN were prospectively collected and retrospectively reviewed with attention to ablation volume, survival, demographic data, steroid dose, and complications. Imaging occurred at set intervals beginning pre-ablation. Ten patients with 11 ablations were evaluated. Four patients had a primary diagnosis of high-grade glioma, while six had metastatic lesions. An average of 86% of CRN volume was ablated. Ablation volume increased to 430% of initial CRN volume at 1–2 weeks before decreasing to 69% after 6 months. No patient had a decline in baseline neurological examination while in the hospital. Four patients developed delayed neurological deficits likely due to post-operative edema, of which three improved back to baseline. The 6-month survival was 77.8% and the 1-year survival was 64.8% based on Kaplan–Meier curve estimates. In this study, LITT was a relatively safe treatment for CRN, providing both a diagnostic and therapeutic solution for refractory patients. Significant increase in ablation volume was noted at 1–2 months, gradually decreasing in size to less than the original volume by 6 months. Further studies are needed to better define the role of LITT in the treatment of CRN. 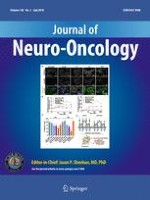