It is important to visually confirm radiofrequency ablation lesions during atrial fibrillation (AF) ablation for procedural efficiency, which requires the integration of a three-dimensional (3D) left atrial image reconstructed from computed tomography (CT) or a magnetic resonance imaging. However, an EP Navigator allows seamless integration of 3D anatomy obtained through 3D rotational angiography (3D-ATG) into an electroanatomical mapping system. We hypothesized that 3D-ATG can be used during AF ablation while significantly reducing the effective dose (ED) and without compromising image morphology compared to a 3D-CT image. Organ dose was measured at 37 points with a radiophotoluminescence glass dosimeter inserted in an anthropomorphic Rando Phantom. The ED was calculated by multiplying the organ dose by the tissue weighting factor. The dose-area product (DAP)-to-ED conversion factor was calculated by measuring the DAP during radiation exposure. The ED for the CT examination was estimated from the dose-length product with a conversion factor of 0.014. ED was calculated from DAP measurements in 114 patients undergoing AF ablation using 3D-ATG. The DAP-to-ED conversion factor for 3D-ATG was 2.4 × 10−4 mSv/mGy cm2 in our hospital. The mean DAP for all patients was 7777 ± 1488 mGy cm2 for the 3D-ATG of the left atrium. The corresponding ED for 3D-ATG was 1.9 ± 0.4 mSv. The ED for CT examinations was 13.6 ± 4.2 mSv (P < 0.001). 3D-ATG can be used during AF ablation while significantly reducing the ED and without compromising image morphology. 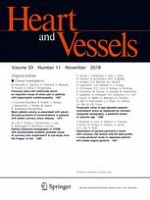 Coronary artery–left ventricular shunt: an important cause of chest pain in patients with hypertrophic cardiomyopathy