This study was conducted on 28 obese participants with body mass index (BMI) of 44.54 ± 7.81 kg/m2 who underwent gastric bypass. Before surgery and at the third and sixth months after gastric bypass, blood pressure, urinary sodium concentration, 24-hour (24-h) urinary sodium excretion, and fractional excretion of sodium were evaluated. In addition, serum sodium and potassium levels were determined. Nonparametric tests were used to analyze the data.

Blood pressure decreased after surgery and remained at low levels over the 3- and 6-month periods. The urinary sodium concentration increased at 3 months after surgery; however, the 24-h urinary sodium excretion and urine volume decreased. Interestingly, although some associations between variables were observed, significant correlations between the 24-h urinary sodium excretion and the systolic, diastolic, and mean blood pressures were found. In addition, the urine volume was higher in the sixth month than in the third month following surgery. 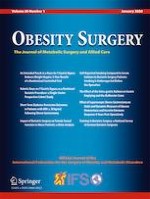 Reply to the authors