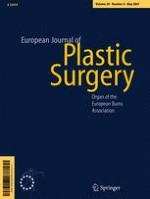 Comment on “Perfectionism and Cosmetic Surgery” by Sherry et al.

Commentary on “The springback phenomenon: does the final position of the nipple/areolar complex correspond to the preoperative markings in reduction mammaplasty?” by Y. Godwin et al.

Patients’ perceptions of the potential complications of bilateral reduction mammaplasty

Stereophotogrammetric measurement of the nasolabial fold in repose: a study of age and posture-related changes