Conventional or laparoscopic surgery is a controlled trauma with a stress response and immunological consequences. Operative trauma, measured by the magnitude and type of intra-operative injury determine the extent and duration of the postoperative inflammatory and immunological responses. Postoperative immunesuppression may have important consequences as it has been related to infectious complications and tumor metastasis formation [ 1– 3].
Major surgery remains associated with undesirable postoperative side effects such as pain, cardiopulmonary, infective and thromboembolic complications, gastrointestinal paralysis, fatigue, and prolonged convalescence. A key factor in postoperative morbidity is the surgical stress response with subsequent increased demand on the patient's reserves and immune competence. Increased demands in organ functions are thought to be mediated by trauma-induced endocrine and metabolic changes. Some laparoscopic interventions have been shown to reduce postoperative morbidity [ 4– 9]. Since the introduction of the laparoscopic approach, immunological competence and stress response to surgery have been increasingly studied in an attempt to explain short-term advantages found for some minimally invasive techniques [ 10– 14]. The most studied cytokine is interleukin-6 (IL-6). It reflects the operative trauma and is a predictor of postoperative complications. Laparoscopic interventions such as Nissen fundoplication [ 11] and cholecystectomy [ 14] offer clear clinical advantages in comparison with the conventional approach, probably based on a better preserved immune system. More extensive interventions such as laparoscopic colectomy have also been shown to provide clinical benefits such as a reduction of morbidity, less postoperative pain, earlier recovery, and shorter hospital stay when compared with the open approach [ 4– 8]. As a result, laparoscopic colectomy is increasingly becoming the preferred procedure in clinical practice. At the same time, laparoscopic total mesorectal excision (TME) in rectal cancer is being used more frequently, mostly on trial bases.
Anzeige
Currently, no data is available regarding surgical stress response and immune competence following open or laparoscopic TME surgery in rectal cancer. As a sub-study of the randomized COLOR II study, which compares the open and laparoscopic approach for rectal cancer, we studied the postoperative stress response, inflammatory and immune function in patients undergoing open or laparoscopic TME in an attempt to provide insight into the differences of postoperative trauma here considered.

In June 2006, the VU University Medical Center (VUmc) initiated participation in the COLOR II trial; a randomized study comparing laparoscopic to open TME in patients with non-metastasized rectal cancer. All patients who were randomized until December 2008 for the COLOR II trial at the VUmc were included into this sub-study.
The primary endpoints of the study were to demonstrate differences in inflammatory response by evaluating pro-inflammatory cytokines (interleukin-6 and interleukin-8) and C-reactive protein (CRP); immune status by evaluating white blood cells and HLA-DR expression on monocytes; and stress response by evaluating cortisol, prolactin, and growth hormone in both groups of patients. The protocol was approved by the local ethics committee and informed consent was obtained from all participating patients. Inclusion and exclusion criteria for the present study were as described in the COLOR II protocol ( www.​color2.​org)
In the present study, patients were analyzed according to an intention to treat principle.
Anzeige

Peripheral blood and serum (BD Vacutainer Systems, Plymouth, UK) were collected preoperatively (baseline), 2, 24, and, 72 h after surgery.
Serum interleukin-6 and interleukin-8 samples were obtained by centrifugation for 10 min at 3,000 rpm at 4°C. All samples were stored in aliquots at −80°C until tested.

Forty patients with a median age of 66 years (interquartile range, 60–74 years) were included in this prospective randomized trial. Twenty-eight men (70%) and 12 women (30%) with a median body mass index of 25 kg/m 2 (interquartile range: 23.5–26.4 kg/m 2). Median distance of the tumor to the anal verge was 10 cm (interquartile range: 5.5–15 cm). Eighteen patients (45%) were randomized to open surgery and 22 patients (55%) to laparoscopic surgery.
The demographic data are shown in Table  1. Patient characteristics in terms of gender, age, body mass index, ASA classification, localization of the tumor, and type of neoadjuvant therapy were comparable for the open and laparoscopic groups (Table  1). Furthermore, type of operation, proximal mesorectal excision, TME, or abdominoperineal resection was comparable. Operation time was significantly longer for laparoscopic procedures, but was accompanied by less blood loss. In patients randomized to laparoscopic surgery, two patients needed some form of conversion by a Pfannenstiel incision and were analyzed according to an intention to treat principle.
Table 1
Patient and tumor characteristics
Morbidity and mortality data, for both groups, are depicted in Table  2. In the laparoscopic and in the open group, six (27%) and four (22%) patients had some form of (infectious) complications ( P = 0.71), respectively. The median time to develop the complication in the laparoscopic and open group was 5 days (range 1–10 days) and 6 days (range 3–7 days), respectively. No mortality was seen in the laparoscopic group, one patient died 3 days postoperatively in the open group due to myocardial infarction ( P = 0.45). No differences were observed in terms of tumor stage or extensity of resection (expressed by lymph node harvest and specimen length).
Table 2
Postoperative data and complication within 30 days
Astler-Coller X: complete remission after neoadjuvant therapy

Interleukin-6 levels were comparable for both groups at baseline ( P = 0.201). Levels showed a significantly lower increase 2 h following laparoscopic surgery when compared to the open approach (4.6 vs. 10.8, P = 0.003). No differences were detected 24 and 72 h following surgery (Fig.  1). No significant differences between the laparoscopic or open approach in the increase of C-reactive protein level and IL-8 levels were detected. (Table  3)
Table 3
Postoperative immune and stress response
Values are depicted as fold-increase values with the preoperative value set at 100%
aSignificant difference
×

In general, laparoscopic surgery is thought to reduce the magnitude of operative trauma. If alterations of immune function and stress response are proportional to the extent of injury, the response following laparoscopic surgery will be reduced when compared with conventional surgery. Many studies have shown that relatively wound-limited interventions such as laparoscopic Nissen fundoplication [ 11] and cholecystectomy [ 14] are associated with a tempered systemic inflammatory response and preservation of the postoperative immune function when compared to the open approach. The stress response to injury and surgery has also been previously described. Anterior pituitary hormone secretion is stimulated by hypothalamic releasing factors [ 15, 16]. Cortisol, growth hormone, and prolactin are secreted in increased amounts from the pituitary in response to a surgical stimulus. Currently, there are few data of postoperative immune function and stress response after more invasive procedure such as laparoscopic colectomy and rectal resections.
In more extensive operations, with more operative wound surface such as laparoscopic colectomy, differences with the conventional approach concerning systemic inflammatory and immune response are more difficult to demonstrate and only a relatively low postoperative IL-6 level has been found consistently in the laparoscopic group. Harmon et al. [ 17] were the first to describe differences in postoperative IL-6 levels when laparoscopic colectomy was compared to the open technique. Wu et al. [ 10] measured cytokine levels both in serum as well as in peritoneal drain fluid. They found significantly lower levels of IL-6 after laparoscopic surgery confirming the earlier studies. CRP is the only acute phase protein which was measured. Since IL-6 is the mean stimulator of CRP production, it is not surprising that the results are comparable. A large randomized study by Schwenk et al. [ 13] showed significantly lower peak concentrations of IL-6 and CRP 2 days after colon surgery. Nevertheless, short-term clinical advantages of laparoscopic colectomy have been shown in different randomized studies. This has been the reason to extend the laparoscopic approach to the surgical treatment of rectal cancer by means of laparoscopic TME, mostly on trial bases.
To demonstrate clinical differences between open and laparoscopic TME, especially the rate of local recurrence and morbidity, the COLOR II study was started. Along with these questions, the study of biological consequences will offer more insight in the possible advantages of these two different surgical approaches to rectal cancer.
Anzeige
In the here presented sub-study of the randomized COLOR II trial, the immune competence and stress response following laparoscopic and open TME has demonstrated some subtle differences between both groups. Significantly lower levels of IL-6 were detected 2 h following laparoscopic surgery; in the subsequent days this difference diminished in concordance with a previous study presented by our institution regarding open and laparoscopic colectomy [ 10]. Moreover, a significant lower depression was found in immune competence 2 h following laparoscopic surgery, since HLA-DR expression was better preserved. This may be interpreted as an important short-term enhanced defense mechanism after laparoscopy, against infections but also theoretically against spreading malignant cells in the circulation [ 2]. Wind et al. [ 18] described an important increase in circulating tumor cells shortly after initiating surgery. Therefore, a better preserved immune function could prevent tumor nestling and therefore distant metastases formation. Therefore, it will be interesting to further investigate if the short-term advantages described in the present study will have oncological advantages in the long-term. However, in the subsequent days the differences diminished, as described for the IL-6 levels. No significant differences between open and laparoscopic surgery were found regarding white blood cell count, monocyte count, C-reactive protein level, interleukin-8 level, or cortisol level. Moreover, no differences could be found regarding postoperative stress response.
In conclusion, although after both laparoscopic and open TME a decrease in immune competence is seen, this competence is better preserved immediately after laparoscopic surgery when compared to the open approach. Also, IL-6 levels are lower 2 h following laparoscopic surgery, indicating a diminished surgical trauma. However, the differences were not consistent at all time intervals, making a definitive conclusion difficult. Although, in the present study, the described differences did not result in any clinical advantages such as less morbidity, the differences on the short term may reflect the less-invasive character of the laparoscopic TME procedure when compared to the open approach. Moreover, an increased immune response may be most important shortly after initiating surgery as the level of circulating tumor cells is highest following manipulation of the tumor [ 18]. Larger studies are required for more definitive results. 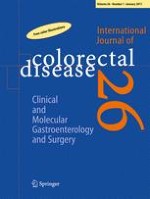 Endoscopic management of failed colonoscopy in clinical practice: to change endoscopist, instrument, or both?

Correlating of GSTM1, GSTT1, and GSTP1 genetic polymorphisms with the risk and expressions in children with isolated Hirschsprung disease