This study investigated the effects of a 10-day heat acclimation (HA) programme on the time course of changes in thermoneutral maximal oxygen uptake (\(\dot{V}\)O2max) during and up to 10 days post-HA.

The non-linear time course of \(\dot{V}\)O2max adaptation suggests that post-testing should be performed 96-h post-training to identify the maximal change for most individuals. In preparation for training or testing, athletes can augment their aerobic power in thermoneutral environments by performing 10 days HA, but the full effects will manifest at varying stages of the post-HA period. 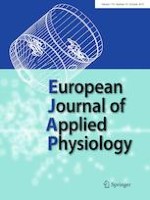 Twelve weeks of resistance training does not influence peripheral levels of neurotrophic growth factors or homocysteine in healthy adults: a randomized-controlled trial