Understanding how patients intend to report side effects allows the development of educational tools to help patients better understand the side effects of chemotherapy and the need to promptly report potentially life-threatening side effects.

To explore the actions cancer patients reported they would take in response to a range of common side effects of chemotherapy and whether these were considered appropriate based on current guidelines and evidence; and to explore the sociodemographic and cancer-related variables associated with patients selecting the appropriate action (immediate medical attention or reporting) for two potentially life-threatening side effects: fever, and unusual bleeding and bruising.

Four hundred thirty-six medical oncology and haematology patients receiving chemotherapy completed two surveys to provide demographic, disease and treatment characteristics, and details on how they would respond if they experienced a range of specified side effects of chemotherapy (for example, nausea and vomiting, fatigue, and skin rash or nail changes). The proportion of patients reporting the appropriate action for each side effect was calculated. Multiple logistic regressions examined the patient demographic and cancer characteristics associated with selecting the appropriate action (seeking immediate medical attention) for two potentially life-threatening side effects of chemotherapy: high fever of 38 °C or more, and unusual bleeding or bruising.

Tools need to be created so that patients better understand the side effects after being treated with chemotherapy and what action they should take. 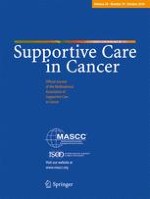 Quality of life in cancer patients—a comparison of inpatient, outpatient, and rehabilitation settings

Photobiomodulation therapy in the management of oral mucositis: search for the optimal clinical treatment parameters

Advanced imaging and hospice use in end-of-life cancer care

Priorities of a “good death” according to cancer patients, their family caregivers, physicians, and the general population: a nationwide survey