The online version of this article (https://​doi.​org/​10.​1007/​s00192-017-3493-2) contains supplementary material, which is available to authorized users
Results were presented at a previous conference: Poster EUGA, Amsterdam, the Netherlands

The treatment of post-hysterectomy vaginal vault prolapse (VVP) has been investigated in several randomized clinical trials (RCTs), but a systematic review of the topic is still lacking. The aim of this study is to compare the effectiveness of treatments for VVP.

We performed a systematic review and meta-analysis of the literature on the treatment of VVP found in PubMed and Embase. Reference lists of identified relevant articles were checked for additional articles. A network plot was constructed to illustrate the geometry of the network of the treatments included. Only RCTs reporting on the treatment of VVP were eligible, conditional on a minimum of 30 participants with VVP and a follow-up of at least 6 months.

Nine RCTs reporting 846 women (ranging from 95 to 168 women) met the inclusion criteria. All surgical techniques were associated with good subjective results, and without differences between the compared technique, with the exception of the comparison of vaginal mesh (VM) vs laparoscopic sacrocolpopexy (LSC). LSC is associated with a higher satisfaction rate. The anatomical results of the sacrocolpopexy (laparoscopic, robotic [RSC]. and abdominal [ASC]) are the best (62–91%), followed by the VM. However, the ranges of the anatomical outcome of VM were wide (43–97%). The poorest results are described for the sacrospinal fixation (SSF; 35–81%), which also correlates with the higher reoperation rate for pelvic organ prolapse (POP; 5–9%). The highest percentage of complications were reported after ASC (2–19%), VM (6–29%), and RSC (54%). Mesh exposure was seen most often after VM (8–21%). The rate of reoperations carried out because of complications, recurrence prolapse, and incontinence of VM was 13–22%. Overall, sacrocolpopexy reported the best results at follow-up, with an outlier of one trial reporting the highest reoperation rate for POP (11%). The results of the RSC are too small to make any conclusion, but LSC seems to be preferable to ASC.

A comparison of techniques was difficult because of heterogeneity; therefore, a network meta-analysis was not possible. All techniques have proved to be effective. The reported differences between the techniques were negligible. Therefore, a standard treatment for VVP could not be given according to this review. 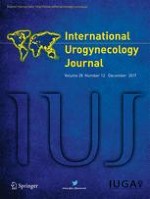