Gastrointestinal stromal tumor (GIST) is a rare neoplasm of the alimentary tract. Previous reports described an incidence of 1 per 100,000. Laparoscopic sleeve gastrectomy (LSG) provides pathological specimens of the majority of the stomach. We examined the pathology from LSG and the incidence and location of GIST. The aim of this study was to study the incidence of asymptomatic GISTs found during LSG at our institution.

A search was conducted in a prospectively maintained bariatric registry. Data collected included the following: gender, age, body mass index (BMI), and concomitant hypertension or diabetes mellitus. Histopathology reports were reviewed for incidental GIST. We compared the patients with incidental GIST to the rest of the cohort.

Pathology reports of 827 patients that underwent LSG between 2007 and 2014 were reviewed. Five patients had GIST in the resected stomach, an incidence of 0.6 %. The group of patients with GIST had lower BMI and older age compared to the remaining 822 patients. All tumors were located close to the lesser curvature.

The incidence of GIST found in this cohort is significantly higher than previously reported. This may be due to an association between these tumors and obesity or because asymptomatic GISTs are underdiagnosed in the general population. These tumors are particularly common in older patients and special attention must be given when performing LSG on this subpopulation. The stomach should be inspected thoroughly before resection. A tumor on the lesser curvature may necessitate changing the surgical plan or aborting the procedure. 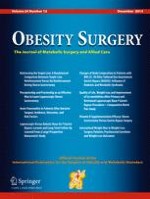 Changes of Body Composition in Patients with BMI 23–50 After Tailored One Anastomosis Gastric Bypass (BAGUA): Influence of Diabetes and Metabolic Syndrome

Letter to the Editor/LED Reply

Obesity Surgery Journal—How Are We Doing?