To assess the role of serial FLT-PET scans during early neoadjuvant treatment as a prognostic marker of response to treatment and survival.

This study is a prospective cohort study which draws from a larger original study which examined the utility of FLT-PET imaging across multiple cancers. Our cohort consisted of patients who had biopsy-confirmed breast cancer amenable to surgical resection. These patients underwent serial FLT-PET scans: the first scan prior to starting neoadjuvant chemotherapy (NAC), and a second scan shortly after starting NAC. SUVmean was derived using an isocontour ROI drawn approximately half way between the SUVmax and background on three planes for each scan. The change in mean standardized uptake value (SUVmean) for the primary tumor between these two scans was then calculated, and patients were stratified into “responder” and “non-responder” groups based on a cut-off of 20% arithmetic decrease in SUVmean between the two scans. The rates of pathologic complete response (pCR) on subsequent surgical excision, overall survival (OS), and progression-free survival (PFS) were then compared between the two groups to assess for significant difference between responders and non-responders.

16 patients (n = 16) met criteria for inclusion and successfully underwent FLT-PET scans in the prescribed sequence of events. Seven of these patients had a decrease of 20% or larger between the two serial PET scans, making them “responders”. The remaining nine patients were “non-responders” to NAC based on PET imaging. Between responders and non-responders, there was no significant difference in median PFS (7.9 years versus 3.7 years; p = 0.425) and median OS (7.5 years versus 5.0 years; p = 0.944). In the 14 patients who underwent surgical resection (n = 14), there was no significant difference in the rate of achieving pCR (33% vs. 14%; p = 0.5846) between responders and non-responders.

Further study of a larger sample size is needed to examine the potential role for FLT-PET in predicting response to neoadjuvant treatment, particularly in correlating with long-term overall and progression-free survival. Our study is limited by small sample size, but does suggest that FLT-PET has a role in the long-term prognosis of breast cancer treated with NAC and surgical resection which is worthy of further study. 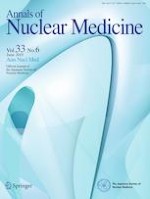 Preliminary results of biodistribution and dosimetric analysis of [68Ga]Ga-DOTAZOL: a new zoledronate-based bisphosphonate for PET/CT diagnosis of bone diseases