A systematic search of electronic databases was performed from earliest record to May 2018; keywords relating to microtechnology, peak match demands and football codes were used.

This systematic review has identified moving averages to be the most appropriate method for identifying the peak match demands in the football codes. Practitioners and researchers should choose the most relevant duration-specific period and microtechnology-derived variable for their specific needs. The code specific peak match demands revealed can be used for the prescription of conditioning drills and training intensity.

Titel
The Use of Microtechnology to Quantify the Peak Match Demands of the Football Codes: A Systematic Review
Autoren:
Sarah Whitehead
Kevin Till
Dan Weaving
Ben Jones 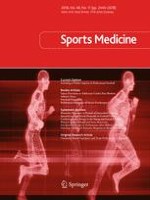 Comment on: “Endurance Performance is Influenced by Perceptions of Pain and Temperature: Theory, Applications and Safety Considerations”

Author’s Reply to Cheung et al. Comment on: “Endurance Performance is Influenced by Perceptions of Pain and Temperature: Theory, Applications and Safety Considerations”