The use of narrow band imaging for the detection of benign lesions of the larynx | springermedizin.de Skip to main content
SUCHE MENÜ 1 2 3 4

In the cases of uncertainty, even if the patient has no complaints about his voice quality, sometimes, benign vocal fold mass lesions are removed to exclude malignancy with the risk of resultant dysphonia. Narrow Band Imaging (NBI) enables a specific visualization of vessel structures in the superficial tissue. Benign lesions of the larynx are frequently characterized by abnormal vessel configuration or an absence of vessels in the area of the lesion. It was hypothesized that, in the primary diagnosis of patients with these benign lesions, the combination of white light and NBI endoscopy enables a better detection compared with white light endoscopy alone. Twenty-nine patients (eight patients with a cyst on a vocal fold, eight with a polyp, seven with a Reinke´s edema, two with a leukoplakia, one with a carcinoma, one with a granuloma, and two without any pathologic finding) were examined with normal white light and NBI endoscopy. 87 video sequences (29 white, 29 NBI, and 29 white/NBI) were generated and randomized and presented to 20 otolaryngologists who rated the videos in terms of the suspected diagnosis. Results were compared with the histopathologic findings of microlaryngoscopy. The probability of detecting benign lesions of the vocal folds was higher using NBI in combination with white light endoscopy compared with white light endoscopy alone. For vocal fold cysts, this difference was statistically significant. NBI endoscopy in combination with normal white light endoscopy improves the detection rate of benign lesions of the larynx, especially of vocal fold cysts.
Anzeige 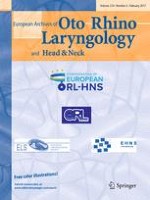 MRI of diffuse large B-cell non-Hodgkin’s lymphoma of the head and neck: comparison of Waldeyer’s ring and sinonasal lymphoma