The incidence rate of surgical treatment of cervical degenerative diseases (CDD) has increased in the USA and a large geographic variation has been shown. Little is known about such rates in Scandinavia and Europe. The aim of this population-based study was to (1) investigate annual incidence rates of operations performed in Norway, (2) to compare trends and variations in rates for surgical indications with and without myelopathy, and (3) to compare variations in the use of surgery between residential areas.

Patients operated for CDD and recorded in the Norwegian Patient Registry from 2008 to 2014 were evaluated according to residential areas (resident county and Regional Health Authority (RHA) area), age, gender, treating hospital, and whether myelopathy was present or not. Surgical rates were adjusted for age and gender. Data from private health care were also included.

Our study shows that the rate of surgical treatment for radiculopathy due to CDD has increased substantially from 2008 to 2014 for all RHAs in Norway. The incidence rate for surgical treatment of myelopathy was more stable. An unexplained and moderate geographic variation was found. 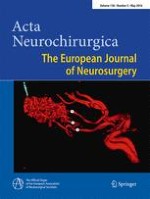 Letter to the Editor (by Invitation) - Spine

Deep brain stimulation and development of a high-grade glioma: incidental or causal association?

Letter to the Editor (by Invitation) - Editorial