The use of TightRope fixation for ankle syndesmosis injuries: our experience | springermedizin.de Skip to main content
TOOLBAR 1 2 3 4
SUCHE MENÜ 1 2 3 4

Ten percentage of all ankle fractures sustain an associated syndesmotic injury. TightRope is a relatively new technique for syndesmosis fixation, characterized by a non-absorbable FibreWire held tight between two cortical metal buttons. The purpose of this study was to evaluate the results obtained with the use of this device.

From January 2011 to December 2015, 54 patients with ankle diastases were treated. Eighteen patients were excluded from the study. Fractures of the fibula or tibia requiring fixation were internally fixed using standard AO techniques. Preoperative and the most recent postoperative ankle radiographs were reassessed for measurements of the tibiofibular clear space (TFCS), medial clear space (MCS) and tibiofibular overlap (TFO). Clinical outcomes were assessed at the time of follow-up using the American Orthopaedic Foot and Ankle Society (AOFAS) score, a self-administered Foot and Ankle Disability Index (FADI) score and patients satisfaction.

TightRope technique can achieve flexible fixation of the syndesmosis and permit full range of motion of the tibiofibular joint. Patients can start rehabilitation exercise at an early stage after operation. The results of this study indicate that TightRope fixation is a valid option for syndesmotic injuries. 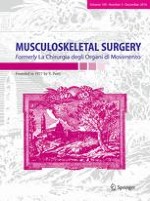 The Porcellini test: a novel test for accurate diagnosis of posterior labral tears of the shoulder: comparative analysis with the established tests

Pedicle screw insertion techniques: an update and review of the literature