The Value of Peritoneal Cytology as a Preoperative Predictor in Patients With Gastric Carcinoma Undergoing a Curative Resection | springermedizin.de Skip to main content
TOOLBAR 1 2 3 4
SUCHE MENÜ 1 2 3 4

Although positive peritoneal cytology is associated with poor prognosis, it has not been found to be independently predictive of outcome when evaluated in context of post-resection pathologic T and N stage. This study was undertaken to evaluate the predictive value of positive cytology in context of other prognostic factors available prior to surgery in patients undergoing R0 resection for gastric cancer, to assess its role in selecting patients for appropriate treatment prior to surgical resection.

Clinical variables for all patients undergoing R0 resection for gastric adenocarcinoma at Memorial Sloan-Kettering Cancer Center from 1993–2002 were reviewed from a prospective database. Patients underwent preoperative assessment of T and N stage with CT scan, laparoscopy, and endoscopic and/or laparoscopic ultrasound. Peritoneal cytology was obtained in all patients. 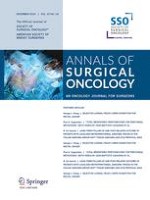 Is Hepatic Resection for Large or Multinodular Hepatocellular Carcinoma Justified? Results From a Multi-Institutional Database

Paget’s Disease of the Breast: There Is a Role for Breast-Conserving Therapy