A 70-year-old man underwent stent implantation for right coronary artery (RCA) lesions with a bare metal stent (BMS) and two sirolimus-eluting stents (SES). However, as both the BMS and SES stented sites developed restenosis after 13 months, he underwent target lesion revascularization using directional coronary atherectomy (DCA). On histopathology, the restenosis lesion at the SES-deployed site showed greater inflammation and less re-endothelialization than that at the BMS-deployed site. Three months later, the SES-deployed site developed a second restenosis, in which paclitaxel-eluting stents (PES) were implanted (PES-in-SES), while the BMS-deployed site was restenosis free. Five years later, restenosis was absent in these RCA lesions. However, by optical coherence tomography and/or coronary angioscopy, the PES-in-SES site in the RCA showed poor neointimal coverage over the stent struts and yellowish neointima, suggesting lipid-rich neoatheroma formation, whereas at the BMS site appropriate white neointima formation was observed. Drug-eluting stents still have problems of persistent inflammation, inappropriate neointima formation, and neoatherosclerosis. Although we are now in the era of second generation DESs in which better stent performance would be promising, we should remember that we are obliged to continue to follow-up all patients in whom first generation DESs such as SES or PES have been placed. 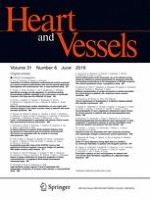 Increased IL18 mRNA levels in peripheral artery disease and its association with triglyceride and LDL cholesterol levels: a pilot study