Dietary hydroxyproline may be involved in the endogenous synthesis of oxalate. Glycolate, produced during the metabolism of hydroxyproline, may exert physicochemical effects on urinary calcium by virtue of its dihydroxycarboxylic acid structure. The aim of this study was to investigate these possible stone-risk scenarios.

We modelled the effect of different glycolic acid concentrations on ionized calcium (iCa2+) and relative supersaturation (RSS) of calcium oxalate (CaOx) using the program JESS. Thereafter, three healthy white males and two healthy black males ingested 30 g gelatin for 3 days. 24-h urines were collected at baseline and after completion of the protocol. Urines were analysed for physicochemical risk factors and for iCa2+ and glycolic acid. Speciation concentrations and RSS values were calculated.

We attribute the decrease in iCa2+ to increases in the concentrations of several Ca–phosphate species, the formation of which is due to the increase in pH. We speculate that the absence of an increase in oxalate excretion despite an increase in glycolate excretion may be due to the mixed racial composition of our test group in which some pathways may be preferred to others. Our findings alert stone researchers to the importance of measuring urinary pH in their workup of subjects and to select racially homogenous groups for investigation. 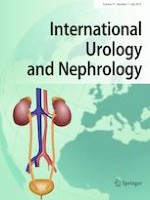 Treatment of secondary hyperparathyroidism with paricalcitol in patients with end-stage renal disease undergoing hemodialysis in Turkey: an observational study

Which treatment is best for patients with AJCC stage IV bladder cancer?

Salvage treatment for radio-recurrent prostate cancer: a review of literature with focus on recent advancements in image-guided focal salvage therapies