In recent years, second-look transurethral resection of bladder tumors (TURBT) has been recommended for patients with stage T1 bladder cancer after the initial TURBT for restaging and deciding the subsequent treatment. However, we believe that second-look TURBT has therapeutic benefits, such as low incidence of recurrence and progression. Therefore, we compare the differences in long-term outcome between patients who did and did not accept second-look TURBT for stage T1 bladder cancer.

We assessed 504 patients diagnosed with urothelial carcinoma who underwent initial TURBT between January 2012 and December 2016 at a single medical center; of these patients, 177 were diagnosed with T1 bladder cancer during the initial TURBT, and we excluded no muscle from the specimen in the initial TURBT. The patients were categorized into groups 1 and 2 based on the acceptance of second-look TURBT, which was performed within 4–14 weeks after the initial TURBT. Group 1 underwent second-look TURBT, but group 2 did not. Both groups were followed-up for recurrence-free survival (RFS) and progression-free survival (PFS), and the risk factors for recurrence and progression were analyzed.

This study demonstrated higher recurrence-free and progression-free survival rates for patients who underwent second-look TURBT. This result emphasizes the importance of second-look TURBT in stage T1 bladder cancer not only for restaging but also for therapeutic benefit. 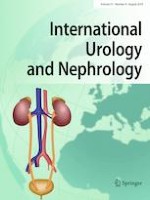 Is it possible to prevent contrast-induced nephropathy with dexpanthenol?

Response to the letter to editor: 24-h urine osmolality should be used in combination with other urine parameters in urolithiasis patients

Frailty as a prognostic indicator in the radical cystectomy population: a review