Children and/or their parents are in fear and anxiety when admitted to hospitals or undergo invasive surgeries or investigations. Clown therapy has been shown as an effective measure in reducing this hospital fear and anxiety. Hence, we carried out a systematic compilation of the existing evidence on the clinical utility of hospital clowns in pediatric population. Electronic databases were searched with an appropriate search strategy, and only randomized controlled trials comparing the effect of clown therapy with standard care in children were included. The key outcome measures were as follows: extent of anxiety and pain felt by children and extent of state and trait parental anxiety. Random effect model was applied when moderate to severe heterogeneity was observed. Forest plot, I2 statistics and risk of bias were evaluated using RevMan 5.3 software. A total of 19 studies were found eligible to be included in the systematic review and 16 for meta-analysis. The pooled SMD [95 % CI] for child anxiety score was −0.83 [−1.16, −0.51] favoring clown therapy. Similarly, a statistically significant reduction {SMD [95 % CI] −0.46 [−0.7, −0.21]} in the state anxiety was observed amongst parents.
Conclusion: We found that hospital clowns play a significant role in reducing stress and anxiety levels in children admitted to hospitals as well as their parents. 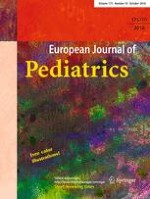 The association between childcare and risk of childhood overweight and obesity in children aged 5 years and under: a systematic review

Granulocyte transfusions in critically ill children with prolonged neutropenia: side effects and survival rates from a single-center analysis

The effect of kangaroo ward care in comparison with “intermediate intensive care” on the growth velocity in preterm infant with birth weight <1100 g: randomized control trial

A national physician survey of diagnostic error in paediatrics