Pancreatic neuroendocrine tumors (PNET) locally advanced may lead to significant local symptoms especially segmental portal hypertension (SPH) with risk of bleeding. The aim of our study was to evaluate the role of SPH on the PNET management in an expert center.

Forty-two patients treated for locally advanced PNET with SPH between January 1984 and December 2012 were retrospectively analyzed.

PNET resection associated with SPH is feasible with a low morbimortality. SPH was not improved by chemotherapy. Prolonged survival was observed after complete macroscopic resection.
Anzeige 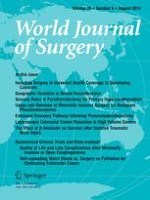 Major Esophageal Dilation After Laparoscopic Adjustable Gastric Banding in Symptomatic Patients: Does It Prevent Effective Weight Loss and How Should It be Treated?