Functional gastrointestinal disorders (FGIDs) are common and distressing. They are so named because a defined pathophysiology in terms of structural or biochemical pathways is lacking. Traditionally FGIDs have been conceptualized as brain–gut disorders, with subgroups of patients demonstrating visceral hypersensitivity and motility abnormalities as well as psychological distress. However, it is becoming apparent that there are certain structural or biochemical gut alterations among subsets with the common FGIDs, most notably functional dyspepsia (FD) and irritable bowel syndrome (IBS). For example, a sodium channel mutation has been identified in IBS that may account for 2 % of cases, and subtle intestinal inflammation has been observed in both IBS and FD. Other research has implicated early life events and stress, autoimmune disorders and atopy and infections, the gut microbiome and disordered mucosal immune activation in patients with IBS or FD. Understanding the origin of symptoms in FGIDs will allow therapy to be targeted at the pathophysiological changes, not at merely alleviating symptoms, and holds hope for eventual cure in some cases. For example, there are promising developments in manipulating the microbiome through diet, prebiotics and antibiotics in IBS, and testing and treating patients for Helicobacter pylori infection remains a mainstay of therapy in patients with dyspepsia and this infection. Locally acting drugs such as linaclotide have been an advance in treating the symptoms of constipation-predominant IBS, but do not alter the natural history of the disease. A role for a holistic approach to patients with FGIDs is warranted, as brain-to-gut and gut-to-brain pathways appear to be activated. 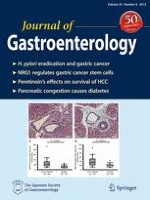 Seventeen-year effects of eradicating Helicobacter pylori on the prevention of gastric cancer in patients with peptic ulcer; a prospective cohort study