Sports mega-events have expanded in size, popularity and cost. Fuelled by media speculation and moral panics, myths proliferate about the increase in trafficking into forced prostitution as well as sex work in the run-up to such events. This qualitative enquiry explores the perceptions of male, female and transgender sex workers of the 2010 Soccer World Cup held in South Africa, and the impact it had on their work and private lives.

Overall, a minority of participants noted changes to the sex sector due to the World Cup and nothing emerged on the feared increases in trafficking into forced prostitution. Participants who observed changes in their work mainly described differences, both positive and negative, in working conditions, income and client relations, as well as police harassment. The accounts of changes were heterogeneous - often conflicting in the same research site and across sites.

Titel
‘There are a lot of new people in town: but they are here for soccer, not for business’ a qualitative inquiry into the impact of the 2010 soccer world cup on sex work in South Africa
Autoren:
Marlise L Richter
Fiona Scorgie
Matthew F Chersich
Stanley Luchters 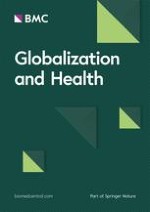 The economic burden of diabetes in India: a review of the literature

Economic impacts of health shocks on households in low and middle income countries: a review of the literature

The burden and treatment of diabetes in France

A concept in flux: questioning accountability in the context of global health cooperation