Tubulointerstitial nephritis and uveitis syndrome (TINU) is a disease in which idiopathic acute tubulointerstitial nephritis (TIN) is complicated by uveitis. Since Dobrin et al. [ 1] first reported 2 cases of acute eosinophilic interstitial nephritis accompanied by anterior uveitis and myeloid sarcoma in 1975, at least several hundred cases have been reported. In Japan, 2 years after the report by Dobrin et al. and Kikkawa et al. [ 2] reported 2 cases of combined interstitial nephritis and uveitis that were not associated with myeloid sarcoma. The diagnostic criteria of TINU are defined as the presence of histopathologically confirmed acute TIN and uveitis, as well as the absence of systemic diseases (e.g., sarcoidosis) associated with these conditions. Patients who suffer from TINU typically develop acute-onset bilateral uveitis, which commonly becomes chronic or recurrent, and fever is the most common symptom of TINU in Japan [ 3]. Herein, we report 3 cases of TINU with different clinical manifestations.

A 15-year-old boy visited a neighborhood clinic for left eye pain and reduced visual acuity, and was diagnosed with left iridocyclitis. He also experienced flu-like symptoms. He was referred to our hospital for detailed examination and treatment on day 10 of the disease.
Anzeige
Among the initial findings, the corrected binocular visual acuity was 1.2. The intraocular pressures were 7 and 8 mmHg in the right and left eyes, respectively. He had 1+ inflammatory cells in the anterior chamber and fine keratic precipitates in both eyes. Iris synechiae and relative afferent pupillary defect (RAPD) were not observed. Mild diffuse vitreous opacity, redness, and swelling of the optic disk were detected in the left eye. Fluorescein angiography (FA) revealed leakage of fluorescent dye from the left optic disk, while neither vasculitis nor macular edema was observed. Blood tests revealed the following results: immunoglobulin G, 2175 mg/dL (normal range 870–1700 mg/dL); blood urea nitrogen, 20 mg/dL (10–15 mg/dL); creatinine, 1.63 mg/dL (0.6–1.2 mg/dL); erythrocyte sedimentation rate, 58 mm/h (≤10 mm/h); and C-reactive protein, 0.62 mg/dL (≤0.30 mg/dL). Urinalysis revealed the presence of protein and glucose, and β2-microglobulin (β2MG) and N-acetyl-β- d-glucosaminidase (NAG) levels of 30,295 μg/L (normal range ≤230 μg/L) and 26.8 U/L (normal range ≤7.0 U/L), respectively. The chest radiographic findings were normal, while abdominal plain computed tomography revealed mild enlargement of both kidneys. Renal biopsy revealed diffuse infiltration of inflammatory cells, mainly small lymphocytes, from the tubulointerstitium to the medulla (Fig.  1), leading to a pathological diagnosis of TIN. Based on the combination of uveitis and TIN, TINU was diagnosed.
×
The patient was treated with 1 course of steroid pulse therapy (methylprednisolone, 1000 mg/day for 3 days) and oral administration of prednisolone 30 mg, which was subsequently tapered. Around day 40, the anterior uveitis ameliorated and FA revealed no fluorescence leakage in the left optic disk. However, when the dose of oral prednisolone was tapered to 10 mg, anterior uveitis recurred along with an increase in the urine β2MG and NAG levels. Ocular and oral administration of steroids is being continued.

A 14-year-old girl visited a neighborhood clinic for right eye pain, and bilateral iridocyclitis was detected. She did not exhibit symptoms such as headaches or ringing in the ears. She was referred to our hospital for detailed examination and treatment on day 32 of the disease.
The corrected binocular visual acuity was 1.2. The intraocular pressures were 19 and 20 mmHg in the right and left eyes, respectively. There was no inflammation in the anterior chamber, despite fine keratic precipitates being observed in both eyes. Iris synechiae and RAPD were not observed, whereas bilateral optic disk edema was detected (Fig.  2a). Goldmann perimetry revealed enlargement of Mariotte’s blind spot, and FA revealed leakage of fluorescent dye from the optic disks and retinal veins in both eyes (Fig.  2b). However, computed tomography did not reveal swelling of the optic nerve. The critical fusion frequency value was within the normal range in both eyes.
×
Anzeige
At the initial visit, neither the blood test nor urinalysis revealed any abnormality. No increase in the angiotensin-converting enzyme level was observed, and there was no sign of bilateral hilar lymphadenopathy on chest radiography. Three months later, urinalysis showed positive protein and glucose findings, and β2MG and NAG levels of 1210 μg/L and 12.9 U/L, respectively.
Since the patient had a cat, cat-scratch disease was suspected. However, she was negative for the anti-Bartonella antibody. TIN was clinically diagnosed without renal biopsy, and TINU was diagnosed based on the combination of uveitis and TIN. On day 81, the right papilledema improved after a triamcinolone acetonide injection in the sub-Tenon’s capsule. Around day 150, despite worsening of the left papilledema, treatment with only ocular steroid administration was continued. Around day 240, the renal dysfunction resolved spontaneously, and the left papilledema was simultaneously relieved. During the disease course, no eye depigmentation, nummular chorioretinal scars, retinal pigment epithelium aggregation, or migration was observed.

A 49-year-old woman visited a neighborhood clinic for right eye pain and was diagnosed with iridocyclitis. Subsequently, she was referred to our hospital for detailed examination and treatment on day 18 of the disease.
The corrected binocular visual acuity was 1.2. The intraocular pressure was 15 mmHg in both eyes. The right anterior chamber had 2+ inflammatory cells, moderate-to-small keratic precipitates, and peripheral anterior synechiae in both eyes. Optic disk edema and macular edema were detected in the right eye. FA revealed hyperfluorescence in the right optic disk, cystoid macular edema, and leakage of fluorescent dye from the peripheral retinal veins (Fig.  2c, d). The patient had been pathologically diagnosed with TIN at another hospital 12 months earlier, and underwent oral prednisolone treatment, which was tapered from 30 mg. Upon admission, blood test and urinalysis revealed only a mild increase in the serum creatinine.
Whole-body imaging studies were performed for suspected sarcoidosis, but the findings did not support this diagnosis. Instead, based on the presence of both uveitis and TIN, TINU was diagnosed. The right anterior uveitis and macular edema were relieved by ocular steroid administration. Around day 180, inflammation of the anterior segment and macular edema occurred in the left eye, but these symptoms were also relieved by ocular steroid administration.

We thank Drs. T Yamane, I Kimura, and Y Yagi, who helped in the examination and treatment of the patients. Finally, we would like to thank Editage ( www.​editage.​jp) for English language editing.
Anzeige

The authors declare that they have no conflicts of interest. The authors alone are responsible for the content and writing of the paper. 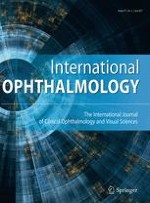 Analysis of multiple sclerosis patients with electrophysiological and structural tests