To address the issue whether three-dimensional (3D) offers real operative time advantages to the laparoscopic surgical procedure, we have designed a single-surgeon prospective randomized comparison of 3D versus two-dimensional (2D) imaging during two different bariatric procedures.

Forty morbidly obese patients were randomized on the day of surgery by a random computer-generated allocation list to receive either a 3D high-definition (HD) display or 2D HD imaging system laparoscopic bariatric procedure by a single experienced surgeon. Forty operations were performed with either a 3D HD display or 2D HD imaging system. After the insertion of the access ports, both surgical procedures were divided in component tasks, and the execution times were compared.

3D imaging seems to decrease the performance time of more difficult bariatric procedures, which involve surgical tasks as suturing and intestinal measurement. Further comparative studies are necessary to address the issue if novice surgeons could benefit from reduced learning curve requested with 3D vision and to verify with greater numbers if 3D imaging can reduce complications. 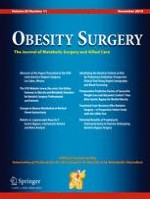 Contraceptive Use Before and After Gastric Bypass: a Questionnaire Study