Epithelial ovarian cancer (EOC) is the most lethal gynecological malignancy, and the lack of chemoresistance biomarkers contributes to the poor prognosis. Cancer stem cells (CSC) have been investigated in EOC to understand its relationship with chemoresistance and recurrence. In this context, in vitro cultivation-models are important tools for CSC studies. MicroRNAs (miRNAs) play key roles in cancer, CSC regulation and apoptosis. Thus, this study aims to evaluate the tumorsphere model as CSC-enrichment method in EOC studies and investigate apoptosis-related miRNAs in tumorspheres-derived EOC cell lines. TOV-21G and SKOV-3 were cultured in monolayer and tumorspheres. Genetic profiles of cell lines were obtained using COSMIC database. CD24/CD44/CD146/CD177 and ALDH1 markers were evaluated in cell lines and tumorspheres-derived by flow cytometry. Eleven miRNAs were selected by in silico analysis for qPCR analysis. According to COSMIC, TOV-21G and SKOV-3 have eight and nine cancer-related mutations, respectively. TOV-21G showed a CD44+/high/CD24−/low/CD117−/low/CD146−/low/ALDH1low profile in both culture models; thus, no significant difference between cultivation models was identified. SKOV-3 showed a CD44+/high/CD24+/high/ CD117−/low/CD146−/low/ALDH1low profile in both culture models, although the tumorsphere model showed a significant increase in CD24+/high subpopulation (ovarian CSC-like). Among eleven miRNAs, we observed differences in miRNA expression between culture models. MiR-26a was overexpressed in TOV-21G tumorspheres, albeit downregulated in SKOV-3 tumorspheres. MiR-125b-5p, miR-17-5p and miR-221 was downregulated in tumorsphere model in both cell lines. Given that tumorsphere-derived SKOV-3 had a higher ratio of CD24+/high cells, we suggest that miR-26a, miR-125b-5p, miR-17-5p and miR-221 downregulation could be related to poor EOC prognosis. 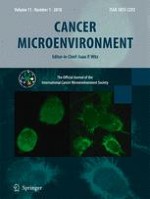 Role of the Nervous System in Tumor Angiogenesis