Of 1328 patients who underwent CBCT scans of the maxilla, only patients with three-rooted MFPs were selected. Morphological features, including the lengths and diameters of palatal, mesiobuccal (MB) and distobuccal (DB) roots, the positions of bucco-palatal (B-P) bifurcations, the distances between root canal bifurcations and cementoenamel junctions (CEJs) and the distances between the apical thirds of the roots, were measured. The canal configuration and the visibility of root canals were also evaluated.

A total of 16/1328 (1.2%) patients had one or two three-rooted MFPs, and a total of 22/2656 (0.8%) three-rooted MFPs were enrolled. The lengths and diameters of palatal roots were significantly greater than those of other roots. The positions of B-P bifurcations were located mainly at the middle third of the root. The median distances between root canal bifurcations and CEJs were 3 mm for B-P bifurcations and 5.2 mm for MB–DB bifurcations. The distance between MB and DB roots was significantly shorter than the distances between other root pairs. All teeth had a type VIII canal configuration. Palatal roots exhibited the best visibility of root canals, whereas the worst visibility was observed within DB roots. A gender-related relationship was observed only for the lengths of the roots.

The occurrence of three-rooted MFPs is not unusual; therefore, preoperative CBCT evaluation could be suggested whenever endodontic procedures are planned on an MFP. 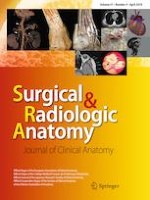 Classification of the superior angle of the scapula and its correlation with the suprascapular notch: a study on 303 scapulas

Redefining the morphometry of subclavian vessels for clavicle fracture treatments