We examined the effects of thrombopoietin (TPO) in combination with stem cell factor (SCF), interleukin-3 (IL-3), and granulocyte colony-stimulating factor (G-CSF) on the proliferation and differentiation of human neutrophils. Purified CD34+ hematopoietic progenitor cells were cultivated with SCF, IL-3, and G-CSF for 7 days (early phase), and thereafter nonadherent cells were further cultivated for 9 days with G-CSF alone (late phase). A large number of highly selected neutrophils (>95%) was obtained on day 16. We compared the expansion capacity in the presence or absence of TPO in each culture phase. The significantly larger number of neutrophils was obtained in the presence of TPO in the early culture phase. The number of expanded cells plateaued at day 16. Ultimately, a 550-fold increase in the number of neutrophils was achieved. These neutrophils gained the ability to respond effectively with chemotaxis and superoxide release, and were appropriately primed by G-CSF, granulocyte-macrophage colony-stimulating factor, tumor necrosis factor-α, and IL-1β for enhanced release of O2 −. The responsiveness of these cells was identical to that of peripheral blood neutrophils. However, TPO did not accelerate the maturation of neutrophils supported by G-CSF in the late phase of culture. Furthermore, priming effects and triggering effects of TPO on the production of superoxide metabolites from peripheral blood neutrophils were not observed. These results suggest that TPO regulates the proliferation and differentiation of neutrophils in the early stages, but not the late stages, of differentiation. 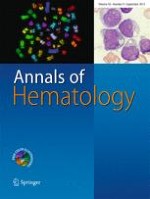 Non-Hodgkin's lymphoma in the elderly