Heart failure is a major health problem and its relationship to thyroid dysfunction has been increasingly investigated in recent years. Since it has been demonstrated that thyroid hormones (TH) and mainly T3 have cardioprotective effects, it is easy to understand that in the scenario of thyroid disorder, cardiac function may be damaged, and inversely in cardiac dysfunction thyroid dysregulation may be seen. The increase in plasma TH produces a clear neurohormonal activation which impacts negatively on cardiac function. In hypothyroidism, and in addition to extracardiac dysfunction, myocardial and vascular remodelling is altered and they contribute to cardiac failure. Abnormal low plasma TSH has also been shown to be a risk factor for developing HF in several recent studies, and they suggest that TSH is an independent predictor of clinical outcome including death and cardiac hospitalizations. Therefore, physicians should consider all these concepts when managing a patient with heart failure, not only for a clear diagnosis, but also for better and accurate treatment. 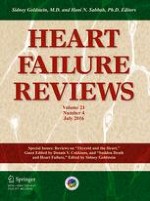