Tibial plateau fractures are complex injuries of the articular and the metaphyseal segments. Surgery is challenging due to the fracture patterns and the associated complications. The displacement of the bony fragments and pattern of involvement of subchondral bone and cartilage characterize the severity of the lesion and treatment strategy. The associated soft-tissue damage, knee instability, meniscal lesions and possibility of compartment syndrome also influence treatment methods [ 1– 11].
Open reduction and internal fixation (ORIF) with plates and screws is an established method of treatment for complex fractures (Schatzker types V–VI). ORIF strategy has undergone refinement with the advent of external fixators into the treatment plan and introduction of low profile plates and anatomic periarticular implants [ 12– 14]. External circular fixation is used for complex fractures with soft-tissue damage because of the advantage of being minimally invasive and a potential to reduce deep infection [ 8, 15– 23]. External fixators are also used as a temporary stabilization frames across the knee joint for pain relief, provisional reduction and soft-tissue control; CT scans are obtained for pre-operative planning [ 17, 24, 25]. Recently, we have observed a progressive modification of the treatment from ORIF to arthroscopic assisted reduction and internal fixation (ARIF) [ 14, 24, 26– 28]. Some authors recommend ARIF for Schatzker type I, II, III, IV whilst a few have done the same for type V and VI fractures [ 6, 9, 14, 23, 28– 31].
Anzeige
The aim of this retrospective study was to compare the results obtained by ARIF versus ORIF treatment.

The study relates to patients with tibial plateau fractures treated between March 2000 and December 2009. There were 100 patients, 54 men and 46 women with a mean age of 51 years (range 13–77), who underwent operative surgery. There were 14 cases of type I fracture, 12 type II, 44 type III, 8 type IV, 12 type V and 10 type VI, according to the Schatzker classification [ 32]. In order to decide treatment, all patients were assessed using X-rays and CT scans [ 25, 33]. If an associated meniscal tear was present, the patient was treated with the ARIF technique. Otherwise the ORIF technique was used, avoiding arthrotomy where possible. For Schatzker V and VI fractures, the ARIF technique was used only in selected cases where a low degree of comminution was present.
There were two groups: group A (ARIF; composed of 50 patients of whom 23 were males) and group B (ORIF; composed of 50 patients of whom 31 were males). The exclusion criteria were: open fractures; pathologic fractures; significant pre-existing degenerative joint disease; severe systemic illness (active cancer, chemotherapy, renal failure or other comorbidities that contraindicate surgery) or a neurological condition that would interfere with rehabilitation. The follow-up period ranged from 12 to 116 months, with a mean of 73, 27 months. No patients were lost to follow-up.
Sixty-four patients were injured in traffic accidents, 24 in sport injuries (ski, motorbike, bicycle and rugby) and 12 by a simple fall. Eighteen of them had associated fractures (2 clavicle fractures, 12 distal radial fractures and 4 proximal humerus fractures) all of which were treated with conservative methods. The patients were evaluated as follows: soft-tissue condition using the Tscherne classification, sensorimotor function of the limb by a clinical neurological examination and vascular status by Doppler.
Anzeige
The mean time between day of admission and surgery was 4 days (range 2–10 days) and the timing of surgery was influenced by the patient’s general and the soft-tissue envelope conditions, in particular significant oedema and skin blisters [ 34].
Type I fractures were treated using cannulated screws, type II by plates and screws, type III by cannulated screws or plates and screws. Type IV, V and VI were treated by plates and screws with cannulated screws added if needed; in three Schatzker V and three Schatzker VI fractures, double plates were used through two incisions; for the remainder of type V and VI fractures, we used a circular external fixator as definitive treatment as the metaphysis was highly comminuted or the soft-tissue conditions were of Tscherne grade 3 [ 35]. With high energy fractures, it was necessary to wait for better local conditions in order to perform internal synthesis and for this reason temporary bridging external fixators were used.
In this series, 6 cases (2 Schatzker V and 4 Schatzker VI fracture) were treated with circular fixators and 10 (5 Schatzker V and 5 Schatzker VI fracture) with temporary bridging external fixators to be followed by ORIF.
Joint distension during ARIF treatment was accomplished by intra-articular fluid infusion by gravity with a third portal used for venting to prevent extravasation increases in joint pressure.
Bone grafts taken from the iliac crest were used in 3 cases (3 %).
Knee motion was allowed 10 days after surgery in both groups. Partial weight bearing was permitted at an average of 6.3 weeks post-operatively and full weight bearing at 9.0 weeks in both groups (Table  1).
The patients were evaluated clinically and radiologically using the Rasmussen and HSS (The Hospital for Special Surgery knee-rating score) systems. This provided a record of functional and anatomic results after treatment [ 36, 37]. The follow-up protocol included analysis of subjective complaints and objective clinical findings. Radiographic evaluations were done pre-operatively, at 3, 6 months and 1 year post-operatively. Standing X-rays of the knee were evaluated at each year interval from surgery in order to detect joint depression, articular degeneration and axial changes.
Table 1
Patient’s data, treatment and associated lesions

There were no complications directly associated with arthroscopic procedures in group A. There were two cases of deep vein thrombosis: one in group A and one in group B. One patient who underwent ORIF treatment developed a common peroneal nerve neurapraxia which recovered fully in 4 months. There are no post-operative incidences of compartment syndrome in either group.
Two patients in group B had a superficial infection treated with antibiotic therapy after sample culture and identification of bacteria. Two deep infections occurred in ORIF group: one in a type V and one in a type VI fracture. The first (type V) was probably due to a proximal pin site infection from the temporary external fixator and was treated by removal of the device and substitution with an antibiotic-embedded cement spacer. The spacer was maintained for 8 months and, when there was no evidence of infection relapse through labelled-leucocyte scintigraphy and serological markers, a knee prosthesis was inserted. The second (Schatzker VI) healed in a cast with ongoing chronic infection despite fixation implant removal. Completion of treatment was not feasible in this case due to mental health issues and lack of compliance with the patient.
There were 10 cases of intolerance to the medial plates and 20 to the lateral plates: six patients in group B and four in group A needed the medial plates removed and 13 patients in group B and seven in group A needed the same for the lateral plates. No mechanical failures were observed. Four patients in group B developed algodystrophy which was treated with hyperbaric oxygen therapy and anti-osteoporotic drugs.
One case in group A (41 years old) had residual valgus angulation and arthritis after 1 year which was treated with uni-compartmental knee prosthesis. Two cases in group B (67 and 69 years old) developed degenerative arthritis with a significant post-traumatic valgus alignment and were treated with a total knee prosthesis (Table  2).

There were no differences between ARIF and ORIF treatment for type I tibial plateau fractures. We found ARIF treatment preferable when meniscal tears were present as it gave opportunity for simultaneous treatment. In cases of Schatzker II, III and IV fractures, there was a small difference in clinical outcomes in favour of ARIF but not statistically significant. In Schatzker V or VI fractures, ARIF treatment was limited to less comminuted fractures and showed less incidence of infection. Mid-to-long-term clinical results are influenced by the development of post-traumatic arthritis and this itself was related to the severity of the initial cartilage damage, subsequent malalignment and non-union. 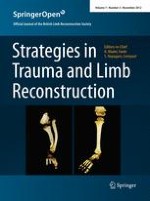 Does the use of an intramedullary nail alter the duration of external fixation and rate of consolidation in tibial lengthening procedures? A systematic review

Limb lengthening in congenital posteromedial bow of the tibia

Flexible stabilization of the distal tibiofibular syndesmosis: clinical and biomechanical considerations: a review of the literature

Correlation between pattern and mechanism of injury of free fall