Clostridium difficile infection (CDI) is a common cause of nosocomial diarrhea. Metronidazole and vancomycin are the primary treatment options for CDI, but increasing rates of antimicrobial resistance and severe, refractory disease have prompted the need for alternative agents. Tigecycline has previously demonstrated favorable in vitro activity against C. difficile isolates, but clinical data on its use in the treatment of CDI are severely lacking. The objective of this study was to describe our experience using tigecycline in the treatment of severe and severe complicated CDI.

This was a retrospective case series of hospitalized patients with severe and severe complicated CDI who were treated with tigecycline. Disease severity assessments were determined according to current practice guidelines. Diagnosis of toxigenic CDI was confirmed by polymerase chain reaction and patients were excluded if they received tigecycline for <48 h. Data were collected by review of the electronic medical record. The primary outcome was clinical cure. Secondary outcomes were sustained response, hospital mortality, and 28-day all-cause mortality.

A total of 7 cases of severe and complicated CDI were reviewed. Intravenous tigecycline administered as a 100-mg loading dose followed by 50 mg twice daily resulted in clinical cure in 85.7% (n = 6/7) of cases. The majority of patients (n = 4/5) were treated with the novel triple therapy combination of tigecycline, vancomycin, and metronidazole and resulted in clinical cure in 80% (n = 4/5) cases. Sustained response at 28 days was 100% among evaluable cases (n = 5/5). Hospital mortality did not occur in any patients, and 28-day all-cause mortality was 28.6% (n = 2/7). 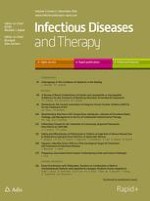 Noninfectious Diarrhea in HIV Seropositive Individuals: a Review of Prevalence Rates, Etiology, and Management in the Era of Combination Antiretroviral Therapy