Standard androgen deprivation therapy (ADT) can be initiated early at the time of diagnosis in asymptomatic castration-sensitive advanced prostate cancer. This definition has recently been expanded to also include an early combined treatment with standard ADT and new antihormonal drugs. We aimed to present the best available evidence for the timing of initiation of ADT monotherapy and combined treatments in castration-sensitive/-resistant prostate cancer.

For this narrative review, we searched Cochrane reviews in the Cochrane Library, systematic reviews and randomized controlled trials in MEDLINE, phase III and ongoing trials in ClinicalTrials.gov and screened the reference lists to extract articles of interest. One author screened the references which were finally included after assessing their relevance through discussion with other experts in the field.

The identified references were grouped by medication (standard ADT, androgen biosynthesis inhibitor, androgen receptor antagonists or combined therapies) and tumor stage (castration sensitive or resistant). The evidence was narratively summarized and discussed in the context of the current therapeutic landscape.

Early standard ADT can reduce symptoms of disease progression and may extend progression-free and overall survival. The patient should be well informed about the higher rates of treatment-related side effects. Deferring standard ADT might be indicated only for well-informed or unfit patients. Early standard ADT is increasingly combined with new antihormonal drugs in castration-sensitive metastatic prostate cancer to gain additional survival and quality of life benefits. Combined treatment at the time of development of castration-resistant disease is well established. 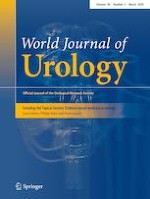 Level of knowledge on radiation exposure and compliance to wearing protective equipment: where do endourologists stand? An ESUT/EULIS survey

Management of patients with high-risk and advanced prostate cancer in the Middle East: resource-stratified consensus recommendations

Correction to: Evidence-based approach to active surveillance of prostate cancer